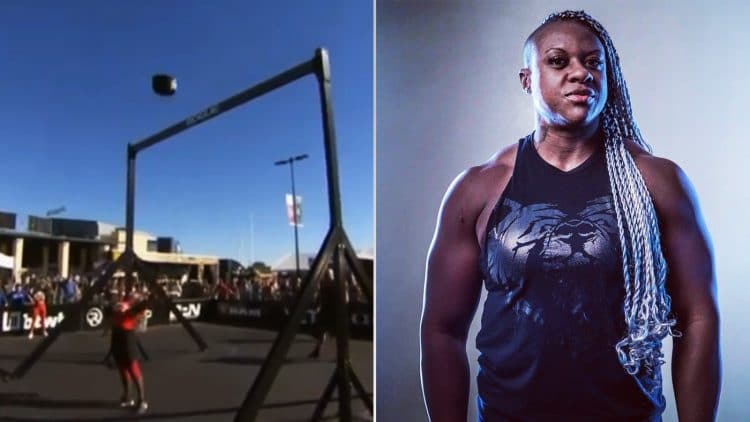 Strongwoman Nadia Stowers won the women’s bag over bar event and matched the world record at the 2021 Rogue Record Breakers event. Stowers successfully tossed the 40lbs bag over a 15ft bar to match strongwoman Hanna Linzay’s world record. The Record Breaker competition was a part of the 2021 Rogue Invitational that took place in Round Rock, Texas from October 29th to October 31st.

Athletes qualified in the online qualifying stage attempted to break eight records in six record-breaker events. However, only one new world record was broken at the event. 2019 WSM Martin Licis lifted a 136kg (300lbs) hammer off the ground and locked out a static front hold. The previous world record for Thor Hammer’s belonged to Hafthor Bjornsson at 118kg (260lbs). Although Stowers did not break a record in the bag over bar event, matching Linzay’s record is not a small feat anyway. Courtesy to Nadia Stowers’ Instagram account, you can watch her tossing the 40lbs bag here:

‘What an adrenaline rush! There were some time miscommunications that almost made me miss it but super coach bear @jacobfinerty to the rescue who would not have let that happen even staying by my side to make sure I was set up right! Thank you @drjantodd for the chance!’ Nadia Stowers wrote in the caption.

Nadia Stowers stands 5ft-5in tall and she tossed the bag nearly 3 times higher. In the caption to her post, Stowers stated that she never successfully tossed the 40kg bag during her training.

2021 Has been a year of achievements for Nadia Stowers. She broke the axle deadlift and log press world record at the Static Monsters Worldwide competition on October 23rd, 2021. Competing in the BIG Speed and Strength gym in Fontana, Arizona in the 82kg weight class, Stowers successfully set the axle deadlift world record of 299.4kg (660lbs) and log lift world record 130.6kg (288lbs). Stowers also attempted a 137.4kg (303lbs) log lift at the event but missed it.

Before her October 23rd lifts, Nadia Stowers successfully locked in 117.9kg (260lbs) in the log lift event at the 2021 Clash on the Coast competition. With these two records, Nadia Stowers now holds the record for the heaviest and second-heaviest log press.

Nadia Stowers has confirmed that she will return to the Rogue Record breakers event in 2022. Judging by her progress so far, it is probable that many more records will be broken in 2022 and during the rest of her career.