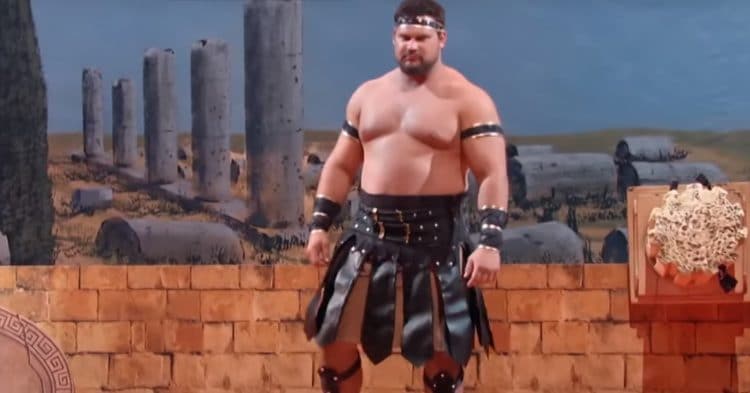 Martins Licis won the 2019 World’s Strongest Man title which was his first victory at the prestigious event. Consequently, he’s the man right now although he may not get as much attention as a few of the other elite Strongman competitors.

But he recently competed on the CBS sports comedy game show Game On, hosted by Keegan-Michael Key in addition to tennis star Venus Williams and NFL star Ron Gronkowski who each captain a team of competitors. Comedians Bobby Lee and Ian Karmel are also a part of the series along with several guest celebrities.

And of course, he’d be a part of a challenge called, Pillar of Hercules where he has to push a pillar against two competitors while someone from each team answers questions.

Competitors and spectators alike were in awe of the size and power of Licis, especially when he first walked out. Even a beast such as Gronkowski looked intimidated. But then it was time to get down to business.

Here’s the full video but we’ve provided additional details below if you prefer to just know who prevailed victorious.

So the first two men to face off against Licis in the event were NBA star JR Smith and comedian Ian Karmel. Venus Williams had to answer questions while they pushed the pillar against each other. Licis eventually overcame the duo to knock them into the foam pit. Then it was time for Rob Gronkowski and Bobby Lee to take on the “The Dragon,” while comedian Gabriel Iglesias answered the questions.

However, they would ultimately suffer the same fate. When it was all said and done, Williams scored 5 points while Gabriel Iglesias earned 4 points.

But it wasn’t over yet, Key suggested everyone go up against Licis and he had no choice but to succumb to the overwhelming odds against him. All-in-all, they had more fun than anything which was very evident.

You can watch new episodes of Game On on CBS every Wednesday at 8 P.M. EST.