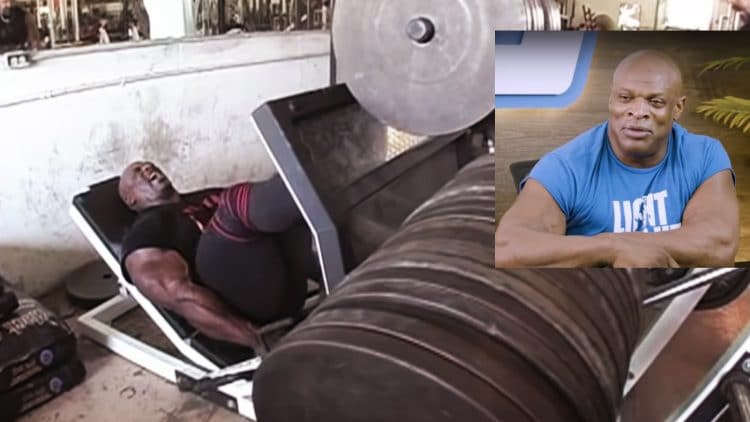 Last week we saw Ronnie Coleman reliving the moment he did an 800lb squat double. Now he reacts to the aftermath of that squat, which saw him then do a jaw dropping 2300lb leg press.

Coleman may be considered the greatest bodybuilder of all time by many, but it is easy to forget sometimes that he was also ridiculously strong. He completely dismantled the idea that bodybuilders only have muscle for show, proving that it is possible to be both enormous, and incomprehensibly powerful.

One of the most iconic of those feats of strength came when Big Ron hit an 800lb squat for two reps, but equally notorious is the fact that right after that squat, feeling like he could have done more, he then proceeded to go ahead and rock out an insane 2300lb leg press. Much like the massive squat set, Ronnie recently looked back on this massive leg press with a video to his YouTube channel.

“This is right after I did the 800lb squat, the same day. Of course I did three sets before this,” Coleman said.

“I was thinking to myself ‘I need to make up for (not doing more squat reps),and I’m going to do that once I get over here to the leg press.”

Ronnie Coleman Went All Out

Ronnie Coleman had already explained that he was disappointed in himself for not pushing himself harder to get more reps on the 800lb squat. He said that the only reason he did not go for more, was because he had made up in his mind before the squat that he was just doing two reps, not realizing how easy it would be for him.

He wanted to make sure he did not make the same mistake here. So once the insane amount of weight was put on the machine, he committed to going all out, and doing as many reps as he could.

“This was so much weight, we had to use a calculator to add it up. I knew, I’m like ‘I’m going all out.’ From the first rep, which was real easy as you can see, I knew once I got into a rhythm I was going to get a lot of reps, and I was going to get way more than two,” Coleman said with a chuckle.

“I did as many reps as I possibly could, until I couldn’t get anymore. That’s when I stopped, on that last rep, and that was rep number 8.”

Without a doubt, this 2300lb leg press was one of the most impressive things that Ronnie Coleman did, outside of the bodybuilding stage. This is just one more reason why he is a legitimate legend within the sport.