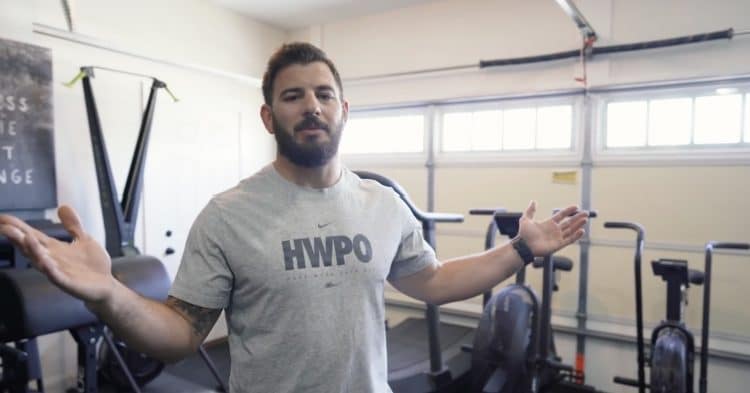 Five-time Fittest Man on Earth Mat Fraser has had some down-time since announcing his retirement from the CrossFit Games. But he’s been busy, and has recently connected with Men’s Health to help supporters and fellow CrossFit athletes develop a home gym on a budget.

Other things he’s been up to include a podcast, nutrition talks, and now is creating fitness videos with workouts and tips for his fans.

Mat Fraser has just given his home gym a complete rehaul and showed it off on YouTube. This time around his gym is 440 square feet, a size fit for the Fittest Man on Earth. The home gym prior to this one was 175 square feet he says.

“I’m going to take you through a tour, show you what equipment I have, what I use the most, and then give you suggestions if you’re trying to build out your own space on a budget…as you can see we have a lot of equipment in a tiny space.”

One wall shows cardio equipment, but Fraser has built the gym of a CrossFitter. He’s included the “different tools in competition,” several different kinds of bikes, and more.

The bikes he’s using include the assault bike, and he’s divided his gym into zones as it would be in a CrossFit gym. He can spend up to 90 minutes on the bike, but will also use the echo bike for interval training.

“You know, I’m hitting 10 to 50 calories at a time and then resting. And then the assault bike, it’s just a staple for competition….These cardio tools are very lower-body-based, so it’s kind of nice to mix it up. It’s a lot more core and lats…but it’s just good to change up the cardio.”

Fraser also has a non-motorized treadmill that he got because he wanted something that “feels most natural to road running.”

His old gym consisted of four sheets of plywood and just a few pieces of equipment. Now, in addition to his cardio system, he has a rogue Olympic weightlifting bar, an Ohio bar, and a few more where he trains his lifting which is his wheelhouse, and clearly his favorite. Weightlifting was his start in the CrossFit community, and he was doing it before CrossFit. His passion there helped him transition from weightlifting into a multi-fitness sport.

“Oh I need an Olympic bar for when I’m doing my Olympic weightlifting…I’ve hit all my PRs on an Ohio bar. I think they’re the most popular for a reason.”

Also in his gym are some kettlebells and weights. He talked about what went into the selection of his weights.

“When I was ordering the equipment, I was like, all right, I want some fives, tens, 15s, 35s for this, 50s for this. And for like, a little bit of extra money I just bought the full kit from five-pound to 100, and then I have a set of 125s that I’ll take for a ride every once in a while but not too often.”

If you’re wondering, yes Mat Fraser has some weight equipment collecting some dust. But he says, he just likes doing other stuff. Now you know, even he groans about some workouts on occasion. For other equipment, Fraser said,

“Over the years, but fair weight belts crossover symmetry. I use this, I mean three, four times a week. This is really good um, I’d say this is probably like a good bang for your buck. I think it’s a hundred bucks but just a pulley system….do your tricep extensions, do whatever, and buy the accessories for it.”

One of his machines is a cardio machine that he hasn’t been able to put on camera for some time. That is probably due to competitive purposes, he wouldn’t want any of his competition to see what equipment he is using. But he really didn’t say why the five-time Fittest Man on Earth wouldn’t show this piece for “a few years.”

“I’ve used this thing for three or four years, um, and just have never allowed it to go on camera because I thought it was a super valuable tool that I wanted to keep a secret….So many of the cardio machines are so leg dominant, quad dominant, um, and so I wanted to have a conditioning tool that targeted the upper body and then was also low impact um and so that like the workouts I do on that are super easy.”

To wrap up, Fraser said he’s got a list of things of equipment to use that people can get when developing their own CrossFit home gym.

“I’m gonna run through the equipment that I use most and I see the most value in to give you suggestions if you’re looking at building out a garage gym or basement gym. Here’s a good starting point, all right. So for cardio equipment I think the best bang for your buck is going to be one of the bikes either rogue or echo bike or concept 2 biker, depending on what type of training you’re looking at doing.”

Mat Fraser also said for interval training with built-in rest periods, go with harder sprints on the rogue echo bike. Those average in the $800 range. For weightlifting bars, he recommends the Ohio bar as a good one for many purposes and noted they come in a variety of colors if you want them to match your gym.

Fraser also likes the rubber-coated change plates, because they help keep all the weight on the bar. He says his have held up for years.

Everything You Need for Your Home Gym

CrossFit is also known for its object obstacle courses. Mat recommended sandbags for training, saying they only go for about $90, and are good for competitive training.

He also discussed squat racks, saying that his suggestion is always to go to the attached pull-up bar if space and height are limitations. For those getting overwhelmed with his suggestions, he says,

“A kit for the build out of your home gym. I think the total comes to, it’s under 3-500 bucks. You don’t need to buy it all at once. You know you can buy the bigger ticket items and then kind of build in the accessories based on what type of training you like to do. But you get that list of equipment, and, you’re going to be busy for a while.”

One thing is clear, Mat Fraser may have retired from the CrossFit Games, but he’s definitely not stopped training hard. It will be exciting to see what he has next as he nurtures and supports the up-and-coming elite CrossFit Games competitors.