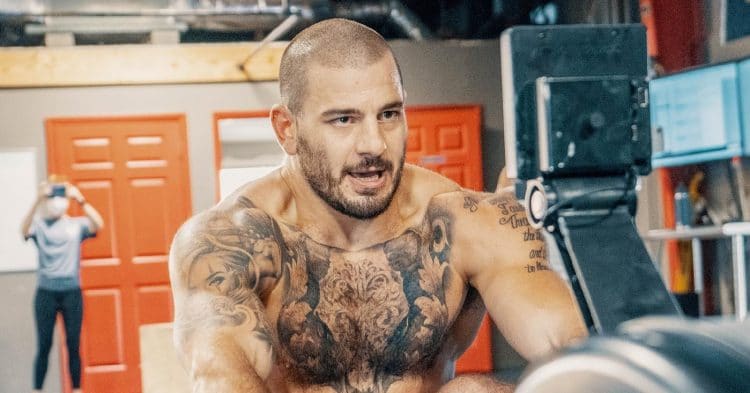 CrossFitter Mat Fraser has won the Fittest Man on Earth® title five times in a row, since 2016, and appeared on the Hybrid Unlimited podcast to discuss his journey.  Mat is just coming off the 2020 CrossFit Games season and looking ahead to the 2021 CrossFit Games.

With him during the near two-hour podcast, was his fiancé Sammy Moniz. They talked about everything from dirty dishes, to the sacrifices endured during training for the elite CrossFit title and six-figure purse.

Of the sacrifices, there were many, but Mat wasted no time discussing some of the little things he has done over the years to build his legacy as the GOAT. He also had no problems discussing how his soon-to-be life partner Sammy Moniz helps him out along the way.

She comes from a CrossFit background as well and has been CrossFitting for a long time. Her parents are also CrossFitters, and Mat’s mom does CrossFit as well. Sammy Moniz was the first to discuss sacrifices during their journey.

“I don’t really like the word ‘sacrifices.’ I mean, Mat says it to me all the time, but for some reason to me, it has a negative connotation. It’s about an adjustment. Like, we’re going through one phase of our life, and we’re going through this certain set of rules. It’s like, investments, or ways of living, or whatever, and so we all have our own kind of contribution to that phase of life.”

She also said she’s not working a 9-5 anymore, or even climbing the corporate ladder as she was before she met Mat. They’ve even had to miss Thanksgiving dinner on occasion, which is Sammy’s family’s biggest holiday. But they say, that’s the job and that’s life, and it’s only a temporary situation. They consider the sacrifices as investments.

Mat once said if he wasn’t getting paid for it, he wouldn’t do it. And that’s how the CrossFit journey started.

He didn’t want to change his diet when he first started working out in college, so he went into the working out part of life. It started off for him as being lonely and wanting to meet new people. So he joined the CrossFit gym where he could do workouts with other people and make friends.

Soon he was able to pick up a few hundred dollars here and there on the weekends, and the hobby became a career.

He eventually joined the community on a more full-time basis.

But he saw a lot of rejection, people didn’t want to be his friends by the time he got second place in his first competition.

The off-season is about two months a year, approximately, with one of those months being solid time off before he needs to start thinking about training again for the next season.

Mat described that one month as “being a toddler in a grocery store for a full month.” He gets to eat whatever he wants, and relax a little bit. One example of that is that he will eat blueberry pie for breakfast. They will pick one up and walk down to the dock with a fork and have at it.

Mat really gets excited about being hungry. He loves to eat and even just “getting hungry” is something to look forward to, especially in the off-season.

His favorite things to do in the off-season are staying up until 3 in the morning, not having to be at the gym so much, and couch-time. He has his favorite spot on the couch and he doesn’t want to move when he’s on it.

He said one time his training partner and 4-time Fittest Woman on Earth® Tia-Clair Toomey came over for lunch, and she hopped on the couch with a blanket and he and Sammy just looked at each other to say, “Do you want to tell her or should I?”

Does the Fittest Man on Earth® Have Weaknesses?

Mat was asked about his weaknesses and said, “Oh yeah, I got a ton of them.” But he also specifically said he wouldn’t mention what they were on a live program. He pointed to some aspects of training where he was a little weaker.

“Every season is about problem-solving. What am I bad at? How do I get better? On the weightlifting side, I reach out to a powerlifter and said, teach me. And uh, my swimming is terrible. So this last season I was swimming 3 times a week. I swam more in the 2020 season than I did in my whole CrossFit season.”

He also complimented Tia on her swimming prowess, as did Sammy, “That girl’s a fish.” He said she beats everyone in both female and male divisions, and he admires her for that. He says it’s her strongest skill, but describes swimming for himself as, “just a beat down every day.” He also said he’s put more miles into swimming this year than he has his whole CrossFit career.

“I swam three times a week. The volume was bigger, the distance was greater. And we show up to the Games and it’s like, we have to swim 200 meters.”

How Mat Fraser Prepares for the Games

Mat talked a little bit about the mystery of the CrossFit Games, and how that plays into his training. He says they may not know much about the workouts or events ahead of time, but he thinks about the resources poured into the Games and how they would be used in an event. He says,

“We know when we go to the Games, that we’re going to be doing more odd stuff. Like, the resources that competition has are very vast. And so there are certain things that we’ll do as competitors. So, all right, ‘the Games are now going to Madison, Wisconsin.”

What is in Madison, Wisconsin, trek bikes, etc. So like the first Games we were in the Games went to Madison. And we went out there. We went out there in about February or March and we started going to the park, the national park.”

Mat and Sammy both talked about how when the Games were in Aromas, they checked it out and realized some hill running was going to be involved in the Games.

They also look at the sponsors of the Games for clues. For example, one year they noticed that Assault Fitness was on the sponsor list on the Games website. So they realized that was new, and they would have to do some training on the assault bike for that year’s Games.

Mat Fraser also recognizes that any year could be the year he walks away without the title. He thinks about that every day in the gym.

He also says he can’t see him walking away from the sport anytime, with or without the title.

“I’ve always kind of jokingly said, don’t remember me. I came here to do what I did, and I’m just going to disappear. I think it’s been too much of a chunk of my life to want to do that [walk away.] I’ve dedicated too much of my life, built so many relationships, I’ve fallen in love with it. I could never just walk away.”

He says he has something to offer in terms of coaching and teaching and thinks that may be where his legacy goes after his competition side. He wants to be known as being a winner on the mental side of things, in terms of getting his headspace ready for each competition.

“There’s not too much that I don’t love about what happened. There has been some tough times, but….that’s life.”

Mat Fraser says if he leaves the sport, he’s doing so with the love of his life, the best friends in the world, and a lot of opportunities.