Mat Fraser and Tia Clair Toomey take their training for Stage 2 of CrossFit Games 2020 to Instagram with 1000 box jumps. 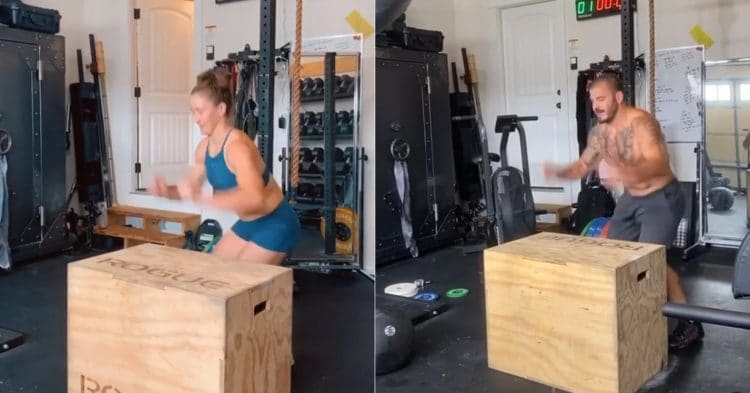 Mat Fraser and Tia-Clair Toomey have taken their training to social media again, to show their competitors what it takes to win a title with over 1000 box jumps, each. It’s riveting to watch the stamina and dedication that goes into performing what looks like such a simple task, more than 1000 times.

In last month’s Stage 1 of CrossFit Games 2020, Mat Fraser from the United States crushed his fellow Americans by over one hundred points. His total score to win Stage 1 of the competition came in at 656, while second place Noah Olsen scored 488 and third-place Justin Medeiros at 480.

Fourth and fifth place holders were American Samuel Kwant with 449 points, and Canadian Jeffrey Adler with 420 points. It is these five competitors that Fraser will go up against in Stage 2 this month while competing for the Fittest Male on Earth title for 2020.

Fraser posted his accomplishment to Instagram this week, saying,

“I wasn’t expecting company. Just doing my workout. I don’t know if you heard me counting. I did over 1000.”

Tia-Clair Toomey is at the top of the leaderboard for Stage 1 of the CrossFit Games 2020. From Australia, but training in the United States, she took home 615 points in last month’s Stage 1 competition. She will compete against Brooke Wells from the United States with 580 points in second place.

Do we think Mat Fraser and Tia-Clair Toomey will win the titles at Stage 2 of the CrossFit Games this month? When you see athletes pushing themselves this hard, it’s impossible not to be in awe. Yes, we think they will, and we are not alone.

“You two pushing each other will make almost impossible to have other champions.. Impressive!! All the respect to your grind.”

Mathew Fraser and Tia-Clair Toomey are so far unbeatable this year, with multiple titles behind them to back up their game. We think that trend can continue.

Jumping exercises are one of the most effective ways to build lower body power. Power plays a vital part in...

Australian sensation Tia-Clair Toomey stands as one of the most successful CrossFit athletes of all time. She is coming off...

The six time Fittest Woman on Earth®, Tia-Clair Toomey, has recently revealed that she is not retiring from the sport...