Until now, CrossFit's Tia-Clair Toomey has been mum about whether or not she'll be in this year's Open, but she was recently seen in training 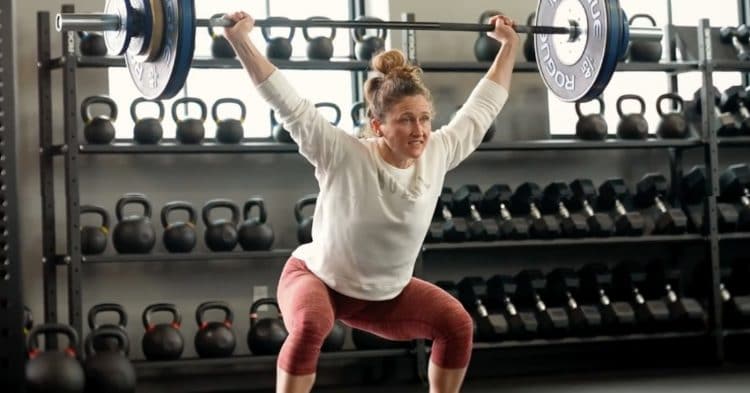 Attention CrossFitters, Tia-Clair Toomey is training for the CrossFit Open.

When CrossFit’s five-time Fittest Man on Earth Mat Fraser announced this year that he would be retiring from competition, the CrossFit community was worried and wondering if his training partner four-time Tia-Clair Toomey would be doing the same. This week, after arriving back in the United States, Tia-Clair Toomey and her husband and coach Shane Orr put those worries to rest with a YouTube video.

Tia-Clair Toomey and Shane Orr Back in the United States

Tia and Shane have been in South Korea since the end of 2020 through the holidays, and have been spending the last several weeks there to train to qualify for the Australian Women’s bobsled team. Tia has already won a race there, marking herself as a competitive bobsledder. Now she is back in the United States to tell her supporters she’s here to compete again and shot a video for them to reveal her next big step – the CrossFit Open.

“So we’re here at the Rogue Headquarters here in Columbus, Ohio. I’m visiting Rogue pretty much checking in with the team and also working on a few items that I have in store that will be coming out hopefully later on in this year,” Toomey said.

“So I’m excited about that, and basically today we’re just going to be training. We’re two weeks out from the Open, and I’m trying to flesh out the jet lag from Korea, and then you know, get my fitness back so it’s ready for game time when the Open begins.”

Tia also noted that under CrossFit rules she has to perform the semi-final event in her birthplace of Australia, and says she expects to be heading back there with Shane when the time comes.

During her visit at Rogue, Tia wanted to show fellow CrossFitters, elite or otherwise, what she uses to work out. She pointed out accessories, weights, and discussed how each one works best for her.

“You can put your belt on and do like, marches, and they are just like, deceivingly hard. You can also squat, and you can change up your squat stance as well. So like you can work various different parts of your glutes and your legs, even your core, and your torso.”

One of Tia’s favorites is the lat pull-down machine. But she also showed fellow athletes a squat rack and how to use it. She noted that she likes to have two of everything, such as 2 GHDs, two rolls, 2 skiers, 2 bikes, a “couple of d-bag balls” and many other options.

She likes to do the leg press, and also pointed out some barbells, noting what’s important this time of year for CrossFitters,

“So we got about two weeks until the Open starts, and it’s one of those things where I know or I think I could be a lot fitter than what I am currently,” Toomey said.

“However, I know that I’ve actually you know gone into [seasons] more unfit, but I think when I really think about it I’m probably not as focused as what I would like to have been. So, over these next two weeks it will be like prioritizing the Open, and having that at the forefront of my mind, rather than having other distractions.”

She told other athletes she’s not worried about being at her best Self right now.

“I know that I don’t need to be you know, 100 at my full fitness capacity right now. But I definitely still want to you know, give it my best shot and I don’t want to be walking away disappointed,” she said.

“So, I should be able to fine-tune that leading into the next two weeks, and then um I’ll be right where I need to be for the Open when that comes.”

Tia also told her fans how to decrease heart rate when working out to maximize competition results.

“Jump on the burpees, they would elevate the heart rate. However, I could manipulate and slow the movement down to make sure I was smooth, and when you, when you’re smooth smooth as fast,” Toomey explained.

“I was smooth, nice and consistent, somewhat fast. But I could lower the heart rate jumping onto the bike, getting nice and powerful to start off, then settling into a nice comfortable pace, making sure that I hit the halfway mark at 30 seconds. Then I wasn’t panicking to get the rest of the calories done, so that’s also when you reduce the panic you reduce the heart rate as well.”

It’s clear that Tia was excited to be there, and think about the Open again. And it was also clear that she is doing it with her best friend Shane Orr. The giddiness trickled into a story on the first time that she and Shane met.

“I have a little romantic story, so the first time that I guess, that I deliberately made a move on Shane, he was at the gym working out. I was also and my dad and I were doing like our plyometric training for my track,” Toomey revealed.

“There was this machine which was like the cable row, and Shane was doing his like, cable rows, and there was like a bubbler next to it. I wasn’t thirsty but he happened to be there.

It almost sounds like she just met him for the first time again, it’s adorable seeing the Fittest Woman on Earth get giddy about it. It looks like Tia-Clair Toomey is going to be in love with the cable row forever, and we think that couldn’t be cuter.

The next thing they both are giddy about, the CrossFit Open.

“Getting back into the 2021 season for CrossFit and I am honestly so pumped I’ve had a nice break. I feel refreshed and energized and I just can’t wait to get into it….really exciting.”

We are happy this issue has been put to rest, and are just as excited to see Tia-Clair Toomey back in the CrossFit Open.