Conor McGregor is no stranger to trash talk but did he finally go too far?… The Irish superstar apparently found a photo online of Khabib Nurmagomedov and his wife at their wedding and decided to comment on Khabib’s wife’s head garment which is commonly worn by women in the Muslim religion.

Now, Khabib defeated McGregor in October of last year at UFC 229 but it seems like McGregor is just not letting it go as he said to ‘Eagle’ don’t be scared of a rematch in a recent tweet.

Before this message Conor McGregor who already hung up his gloves from sports of MMA still taking jabs at Khabib, and especially his wife?

This is what he wrote in the Twitter post 15 minutes before taking it down… “Your wife is a towel mate”. 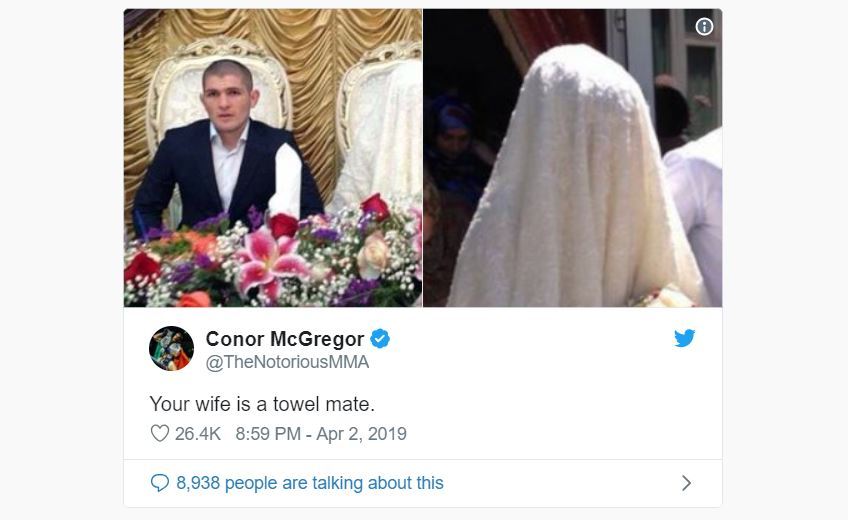 There’s no reason for Conor to still be insulting Khabib nearly six months after their fight if he didn’t want a rematch. So many suspected the whole retirement announcement was just for attention, and we think this might be the case unless Conor McGregor just has it out for Khabib…

But this all started when McGregor threw a dolly at the window of a bus carrying Khabib inside and then it snowballed into McGregor insulting Khabib, his father, and their Muslim religion. Then after UFC 229, Khabib jumped out of the ring in what resulted in an all-out brawl between both corners.

So, the two fighters do have a lot of history and apparently, Conor McGregor might still be upset about his defeat back in October 2018.

Now, in response to McGregor’s Tweet, Khabib’s manager Ali Abdelaziz had some words to say of his own…

Talking shit, this guy is insulting someone’s wife and making fun of her religion and belief. He doesn’t realize he’s insulting 1.5 billon Muslims. Religion and family is a no no. You’re fucked Connor, let’s see what the media is going to say now. He’s a rapist, and a bitch.

We’re not sure what this means for the Conor McGregor’s future but a rematch seems likely as it would be hard to believe an athlete of McGregor’s caliber would just retire after a loss where he wasn’t even at his best.

Do you think a rematch is in the works?