Liver King challenges "The Notorious" to eat raw organ meat: 'Nobody, and I mean, nobody, attacks Liver with such ferocity' 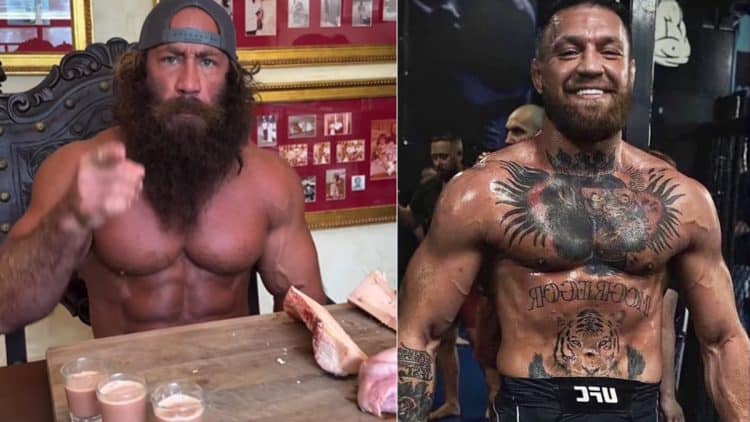 Liver King, who is known for eating raw organ meat and sporting a ripped physique, got the attention of former UFC two-division champion Conor McGregor. In a post made to Instagram, Liver King called out McGregor after the Ireland native made light of his ancestral lifestyle in a recent tweet.

Over the past few years, Liver King took center stage in the world of social media. The 45-year-old turned heads with his unusual raw meat diet along with his rugged, jacked physique, which he says was mostly made possible by living out the nine ancestral tenets he lives by daily.

His raw organ meat diet and boisterous personality elicited strong reactions from the public. One of which was UFC color analyst Joe Rogan, who doesn’t believe in the persona Liver King has adopted. Moreover, Rogan questions Liver King’s lifetime claim of not using steroids and/or performance-enhancing drugs.

But now it appears he’s got the attention of another superstar under the UFC banner. Specifically, former UFC Featherweight and Lightweight Champion Conor McGregor. Earlier this week, “The Notorious” responded to a fan who told him that he’s trying to emulate the social media phenom. According to the Irish superstar, his combat skills have seen him destroy more liver than anyone — including Liver King.

In a recent post made to Twitter, McGregor issued a cryptic message to the social media star.

“Who? I eat the liver with shots not forks. Ball of the foot, heel of the foot, fist, elbow, you name it. Even the butt of the head on the sly I dig them in. Production sees nothin till highlights, and even then only the next day. Motherfucker I destroy liver. I’m King, period.” Conor McGregor wrote.

Who? I eat the liver with shots not forks. Ball of the foot, heel of the foot, fist, elbow, you name it. Even the butt of the head on the sly I dig them in. Production sees nothin till highlights, and even then only the next day. Motherfucker I destroy liver. I’m King, period. https://t.co/bJNizq5KJP

A few days after McGregor’s post, Liver King gave his formal response in the company of a Proper 12 Irish Whiskey bottle, a spirit that McGregor is responsible for creating, which he’s since sold his majority stake for $600 million last year.

Liver King challenged McGregor to “practice what you preach,” and once again highlighted that ‘Liver is King.’

“👑 I’d like to take this chance to apologize… to absolutely f*cking nobody.

Last time I checked, the name is Liver King because LIVER… IS… KING!

You should know this crown is motherf*cking bolted to Liver King’s head… it’s going to take one helluva savage to remove it.

Nobody, and I mean, nobody, attacks Liver with such ferocity (at breakfast, lunch and dinner).

If you’re game to try, by all means, practice what you preach @thenotoriousmma … until then, you can call me Liver King.” Johnson wrote.

In addition to the caption, Liver King had a stark message for the decorated UFC fighter.

“The one and only undisputed champion of the world — Liver King here. Taking shots, making shots, breaking bones, and busting balls. If you or any other ‘Notorious’ nobody think you have what it takes to take the throne, then step up, take your best shot. Surprise, surprise motherfu**er, the King is here!” Liver King said.

This isn’t the first time that Liver King challenged MMA fighters outside of the cage. Days ago, the meat-eating primal took on reigning Bellator Lightweight Champion Patricky Pitbull and UFC Middleweight contender Paulo Costa in a liver eating contest.

While Liver King won the contest handily, Costa was quick to point out that he cheated. He shared that Liver King’s liver servings were covered in salt, sugar, and sauce, but his weren’t. With his ancestral message reaching a wider audience, Liver King is hoping to effect change by promoting a healthier lifestyle.

Since Liver King tagged McGregor in his latest call-out video, perhaps this strange saga is far from over. Fans may have to wait even longer for a liver showdown since McGregor is eying a return to the Octagon sometime soon.