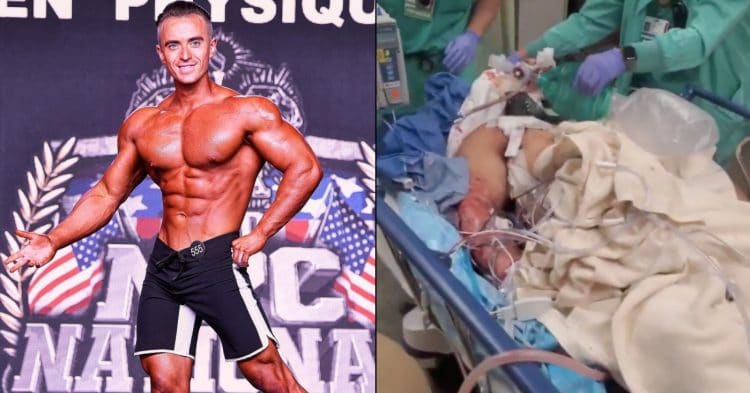 Men’s Physique competitor Andrew Noltemeyer is being treated in the hospital, in the ICU. This happened after he was struck by a car while walking on foot.

Noltemeyer is a Men’s Physique competitor for the NPC, as well as a fitness model and content creator for TikTok. He does not have the largest following yet, but he is an up and coming talent that is working to grow his fanbase.

Unfortunately he has found himself in a difficult position, according to a post to Instagram from his partner and IFBB Women’s Physique Pro Jada Beverly. Here she revealed that Andrew is in the hospital, being treated in the ICU for two fractured legs after being hit by a car while walking.

“This is 28 year old physique competitor Andrew Noltemeyer was hit on foot by a car today. He is in surgery today for his badly fractured legs… He was hit only a few hours ago today September 28th…” she wrote in the post.

In the video that was shared along with the post, you can see Andrew being treated by hospital staff, while he appears to be in rough shape. He has a neck brace on and appears to have blood and marks on his face and arms, not to mention the damage done to his legs.

Hopefully things go well for him, and Andrew Noltemeyer is able to recover and heal from this incident. At the time of writing, there have not been any further updates on his condition or the results of his surgery.

At 28 years old, there is still time for Noltemeyer to make some moves in the bodybuilding world, provided he is able to recover and heal from this tragic accident. Moreover, he has his hands in other ventures like being a male model and TikTok star, so those could take precedent over his competitive career, if that is where his true ambitions lie.

Fitness Volt would like to wish Andrew Noltemeyer a speedy recovery from this incident, and hopefully he is able to return in good healthy sooner rather than later. Stay tuned for updates as more information becomes available.