Krizo will attempt to win his IFBB Pro card at the 2022 Olympia Amateur in Italy. 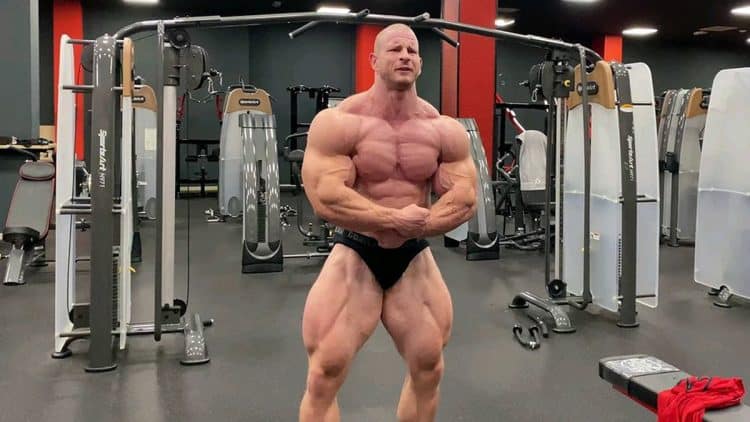 Michal Krizo’s competition prep for the upcoming Olympia Amateur Italy contest is nearing its end. The Slovakian bodybuilder has garnered a lot of attention since transitioning to the NPC. At 6 feet 2 inches tall, Krizo has a significant height advantage over the vast majority of his competition in the Open division. His massive arms, chest, overall size, and conditioning have imparted him an aura of invincibility. Therefore the 32-year-old is seen as a potential top contender in the Open division even though he is yet to earn his IFBB Pro card. Respected figures in the bodybuilding community like Milos Sarcev and Jay Cutler have opined that Krizo could be a frontrunner for the Mr. Olympia throne in the near future.

The Slovakian bodybuilder’s competition prep for the Olympia Amateur Italy contest is in the last stages. He recently went through a shoulder workout as a part of this prep. The video of this session was uploaded on Krizo’s YouTube channel.

Krizo started his shoulder workout with this exercise on the Smith machine. The shoulder press is one of the most popular compound movements to build upper body strength.

The bar on the Smith machine moves along a fixed trajectory and reduces the chances of injury. Krizo will be competing in a very short period, and therefore ditching the free weights is a smart choice at this stage of the competition prep. Krizo cranked out three sets of this exercise and moved on to the next one.

The Olympia hopeful next targeted the lateral deltoid head, also known as the side delts, with the dumbbell lateral raise.

He applied the progressive overload principle to this exercise, performed four working sets with incrementally heavier dumbbells, and moved on to the next exercise after a double drop set at the end.

“I do two exercises for the side delts. I do lateral raises and then barbell upright rows at the end. But one exercise for the front and one for the rear delts… You train the front delts with chest too and the rear delts with back… So it’s obviously enough…” Krizo said.

Krizo next targeted the posterior deltoids with this exercise. In addition to the rear delts, the seated bent-over lateral raises activate the side delts, trapezius, and rhomboids. Krizo performed four working sets of this exercise and jumped onto the finisher of the day.

Krizo finished the shoulder workout with the second side delt exercise of the day—the barbell upright row. This compound movement primarily targets the side delts and trapezius. However, upper body muscles work together to complete the upright row. Therefore it is a great movement to build muscles and upper body strength and improve pulling mechanics.

Krizo performed two sets of this exercise. For the first set, he used one plate on each side of the bar and wrapped up the training session after the second set with one and a quarter plates on each side.

If Krizo earns his IFBB pro card by winning the Olympia Amateur Italy contest on Oct. 9, he will have multiple opportunities to win a direct qualification to the 2022 Olympia, scheduled for Dec. 15-18 in Las Vegas, NV. The 32-yr-old plans to go after a 2022 Prague Pro win to earn his maiden Olympia invitation. If a win at the Prague Pro eludes him, Krizo will attempt to win the 2022 Romania Muscle Fest Pro to make his Olympia debut this year.

You can watch the entire workout video below, courtesy of Michal Krizo’s YouTube channel: