The Slovakian mass-monster recently switched to the NPC and is training and posing alongside decorated bodybuilding coach Milos Sarcev. 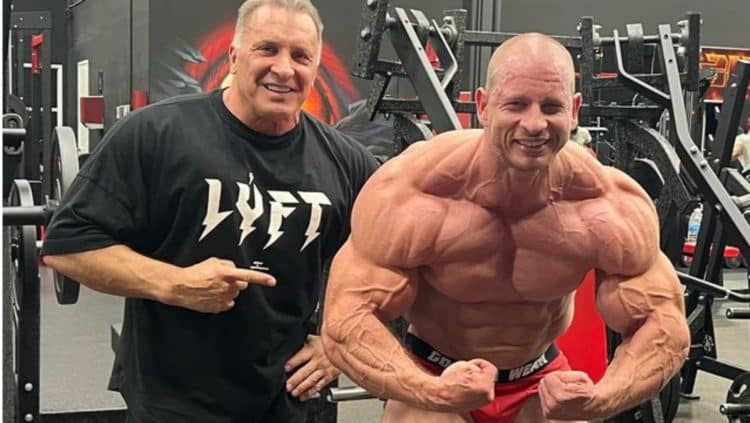 Michal Križo made the switch from the IFBB Elite Pro League into the NPC last week, marking the first step in his campaign for 2022 Olympia. In a recent post made to Instagram, decorated bodybuilding coach Milos Sarcev helped Križo train and pose in preparation for his first show in the new league.

There is no doubt about it, the hype surrounding Michal Križo is skyrocketing. The Men’s Open bodybuilder sports sheer muscle mass and balanced proportions yet still manages to maintain an aesthetic appearance. His huge arms and slim waist also compliment his overall package.

Križo is a 2021 Mr. Universe winner, though he has redirected his focus to the NPC and IFBB Pro League. As of this writing, Križo’s goal is to win a pro qualifier and eventually compete at the Prague Pro, which is expected to take place on October 29, 2022. He will have a number of chances to earn his pro card as many shows are slated to take place over the next few months.

Eying his first contest in the new league, Križo made his way to Las Vegas recently and was caught training with bodybuilding coach Milos Sarcev. “The Mind” is highly respected in the industry for his cerebral approach to the sport.

Milos Sarcev on Michal Križo: “He is 100% Committed to Make an Impact in Our Federation”

“@ifbbmichalkrizokrizanek today at the Mecca @the_dragons_lair 💪🏻. First, pictures and videos don’t capture the real look – I promise you that. Michael looks much more impressive in person. Sheer size and muscle quality can really be appreciated only to a naked eye – when you see him in person.

Keep in mind that he is traveling, not eating, not taking supplements – yet he looks like this year around…He is 100% committed to make an impact in our Federation…and that’s why he signed up for. There was no challenge at the Elite, so he didn’t have to push to the limits…Now, he’ll have the best of the best on the stage with him and he can’t wait to be tested. WATCH OUT!!!” Milos Sarcev wrote.

Milos added that Michal ran out of challenges in the IFBB Elite Pro League and said he’s ‘100%’ committed to success as he embarks on a new journey in the NPC. Sarcev underlined that Križo is maintaining this monstrous build under less-than-ideal circumstances.

The bodybuilding guru said to keep in mind that Michal is traveling, not eating or taking supplements yet manages to maintain incredible size and detailed muscularity. According to one of the most astute coaches in the sport, ‘the hype is real.’

“Hype is REAL!!! Holly shit!!! 😳! @ifbbmichalkrizokrizanek is OUTSTANDING! Pictures and videos don’t do him a justice…You have to see him in person. So much QUALITY 🙌.” Milos Sarcev wrote on Instagram.

This insane most muscular shot grabbed the attention of a few prominent bodybuilders. Retired, seven-time 212 Olympia champion Flex Lewis took to the comment section, further fueling excitement for Križo’s entry into the NPC.

In addition to Lewis, Andrew Jacked, who recently announced his pro debut at the 2022 Texas Pro, was left shocked by the sheer size of Michal.

On a recent episode of the Muscle Maturity Podcast, 1983 Mr. Olympia Samir Bannout named Michal Križo as one of Nick Walker’s biggest threats at 2022 Olympia. While the Slovakian native hasn’t earned his pro card yet, Bannout believes Michal already has bigger arms and a more defined v-taper than “The Mutant”.

After listing a few advantages Križo had over the 2021 Arnold Classic champion, Bannout explained that he didn’t see any weaknesses in Križo’s physique. The former Mr. Olympia believes if Križo enters Olympia in excellent conditioning, he will easily make the top three.

Following Nick Walker‘s Arnold Classic victory, Križo explained that he didn’t see the 27-year-old as a worthy rival. He said Walker lacked symmetry to his physique and stressed that mass isn’t ‘everything.’ Ultimately, Križo walked back his statements about Walker, however.

While it remains unclear if Sarcev is coaching Križo in the long term, certainly training alongside a coach with so much experience will aid the bodybuilder in his future endeavors. With his eyes locked on his first event in a new league, Milos Sarcev believes Michal Križo has a bright future in the sport.