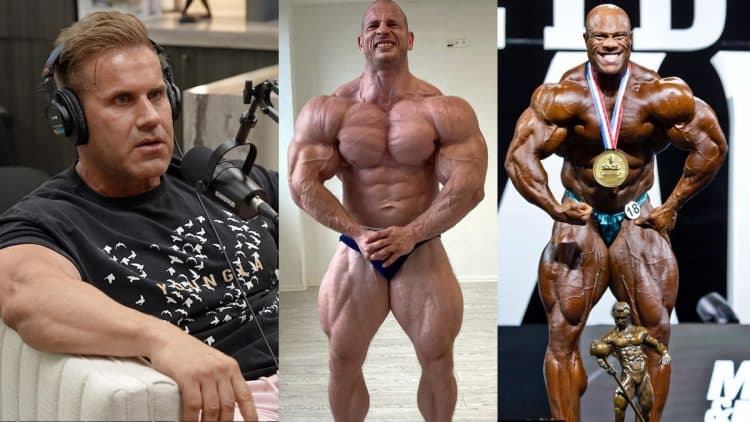 As a four-time Mr. Olympia winner, Jay Cutler has developed an eye for elite-level talent in the sport of bodybuilding. In a recent video, Cutler and bodybuilding guru Milos Sarcev discussed Michal Krizo’s potential in the IFBB Pro League, despite having yet to earn his pro card.

Jay Cutler established himself as one of the best bodybuilders in the sport’s history during his illustrious career. In 2006, he did the unthinkable after dethroning the eight-time Mr. Olympia Ronnie Coleman. To keep up with Coleman’s work ethic, Cutler remembers having to separate himself from society and go to a dark place to maintain his position as one of the best in the world.

The Men’s Open division houses some of the biggest and freakiest bodybuilders around. The current Mr. Olympia two-time winner Mamdouh ‘Big Ramy’ Elssbiay pushes the scales at 337 pounds. With size playing a critical role at Open bodybuilding shows today, fans are excited to see how Michal Krizo fares against elite competition.

Krizo switched from the IFBB Elite Pro League to the NPC recently. After traveling to North America, Michal sought out Milos Sarcev and Jay Cutler. After training Krizo, Milos was left astonished by his fullness and overall size.

Those sentiments were echoed by Cutler, who had the pleasure of seeing Krizo pose in person as well. In Cutler’s summation, Krizo is “100% legit” and sees the bodybuilder being dangerous for the rest of the Men’s Open landscape once he earns his pro card.

During the video, Sarcev and Cutler discussed where Krizo needs to improve before comparing him to seven-time Mr. Olympia Phil Heath.

“Krizo has some of the craziest arms you’ve ever seen in your life — the front double bicep is almost impossible to achieve. Round shoulders, round arms, very good legs, decent chest, good chest, we talked about it when he looked pumped, the chest looked good. I still think he [Krizo] can still build up a little bit more size.” says Milos Sarcev.

When picking apart Krizo’s physique, Milos suggested he should focus on adding width to his back.

“The chest in some other poses, maybe front relaxed… he looks like he can maybe put on more size and he needs a little more width on the back so he needs to create more x-frame. You saw it, you said yourself, his back is not bad.” Sarcev said.

After speaking about Krizo’s future in the IFBB Pro League, Cutler asked Sarcev why Krizo looked so conditioned even though he’s not planning to compete for eight weeks.

“This is normal eating, not supplementing… traveling. It’s freaky to see this.” Sarcev said. “I mean, this [he] looks like photoshopped.” Sarcev shared.

“He has a striated earned muscle. Nowadays, and I’m guilty of site injections myself, but many people not necessarily do site injections but they do steroids everywhere and they blunt separation. Milos said. “This guy is super striated, super separated… high quality. I can only imagine when he’s going to be ripped to pieces, he’s going to have that ability of looking like [Andreas] Münzer.”

According to Cutler, Krizo has thin skin and excellent tie ins like bodybuilding legend Phil Heath.

“When I told his trainer, I said, you don’t see the fibers like this anymore. Cutler said. “When he did his side triceps, you’re going to see the shoulder fibers and all that. We haven’t seen a lot of that, but I compare Phil Heath when I say that because Phil just had the tie ins and the thinner skin.”

Sarcev on Krizo’s ‘Exceptional’ Physique: “This Is as Good as It Gets”

Sarcev says once Krizo fills in his physique, it’s going to be ‘lights out’ for the rest of his competition.

“This is as good as it gets. Here, I have to eat my words. His chest looks good right. For me, projecting, everything is so exceptional. If chest is as exceptional as his shoulders and arms then a little more fuller it’s going to be lights out.”

“Everything is there right. I want to see better abs, especially like lower abs. Maybe working intercostals to get that crazy detail. Look at the condition of a traveler that’s not eating and not supplementing. This is true condition.” Sarcev shared.

“Amateur Prague is not going to be a pro qualifier. He’s going to have to do something else, maybe Dennis’ show to qualify and then maybe go to the Prague [Pro]. Sarcev said.

After meeting with the Open class standout, Milos told his coach to have him train pullovers to add width and thickness to his back.

“I notice that he needs to bring up his back, width and thickness. Sarcev said. Lower lat insertions are there, so the complete package is there, he just needs to fill it up and widen it. I mentioned to his coach I would do a lot of pullovers and stretching.”

Before concluding the discussion, Cutler told Milos that both Andrew Jacked and Michal Krizo can “100%” make the first call out at 2022 Mr. Olympia later this year.

“We just saw two guys that have not hit the Olympia stage yet but can 100% be in the top ten if they show up in condition. Now that’s the big question mark. Can they show up looking like this. How many times have we seen guys that are Mr. Olympia in the gym and then they just don’t show up.” Cutler said.

With plans to compete soon, the bodybuilder has kept fans in the loop on his latest improvements. This week, Michal shared a shredded physique update and revealed he’s sitting at 293 pounds.

In addition to Cutler and Sarcev, former Mr. Olympia Samir Bannout also named Krizo as a massive threat. The veteran said he doesn’t see any weaknesses on the Slovakian native. In fact, he believes Krizo has the potential to finish in the top three at the Olympia contest in December.

Even without his pro card, the hype surrounding Michal Krizo continues to grow. With comparisons to someone as decorated as Phil Heath, Jay Cutler predicts Krizo will make a huge impact in the Open class later this year.