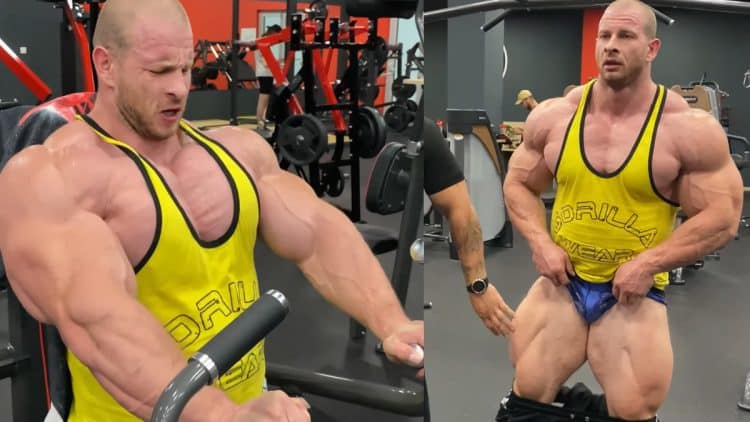 Slovakian bodybuilder Michal Krizo has generated a lot of hype around his name since his transition to the NPC. The 32-year-old is yet to earn his IFBB Pro card but is still being perceived as a potential threat in the Open division due to his size and conditioning. At 6ft-2in tall, Krizo has gathered attention for his massive arms, full chest, and narrow waist. Krizo’s physique has convinced celebrated figures like Milos Sarcev and Jay Cutler of the massive potential he has to become one of the most successful competitors in the time to come.

Recently, he went through a chest workout under his coach Alexander ‘Sano’ Hlobik’s guidance at the 365 gym in Topolcany, Slovakia as a part of his prep. Michal Krizo uploaded the video of this workout to his YouTube channel. In this article, we look at a training session in more detail.

Krizo started his chest training session with pec deck flyes to work the pectoralis major muscles in the chest. It is superior compared to many other chest exercises as it strengthens the torso and stabilizes the shoulder blades – an added bonus! The Slovakian bodybuilder performed a few sets of this exercise and jumped into the next movement.

Seated chest press on the machine

Krizo next took to the seated chest press and attacked the chest and the latissimus dorsi muscles. The chest press machine allows to lift heavier loads with greater control of the movement. He took full benefit of this machine and pushed through a few grueling sets of chest press to pump the blood into the muscles.

Michal Krizo then went on to perform the flat bench press on an iso-lateral machine. Unlike a barbell, or a single lever machine, both arms of the iso-lateral machine are connected to separate weight stacks that move independently. This helps in removing strength imbalance in both sides of the body.

The 32-year-old started the exercise with one and three-quarter plates in the first set. He then slowly worked his way up to the top set with two and a half plates, taking a quarter plate jump with each consecutive set.

Incline bench press on the Smith machine was the next exercise to attack the chest. The barbell on the Smith machine moves along a fixed trajectory as opposed to the free weights. This helps control the weight during movement and reduces the chances of injury as you go heavier. However, this is also a negative aspect of the machine as the movement eliminates the need to balance and control which is not how the lifts in real life work.

This served as the finisher to Michal Krizo’s chest workout. Standing cable crossover are a compound movement that strengthens the pushing muscles of the body i.e. chest, triceps and shoulders.

Krizo performed a few sets of this exercise and wrapped up his chest training session.

Michal Krizo shared his post-workout meal consisting of grilled vegetables and 300 grams of Tuna before ending the video.

Approximately four weeks out of the upcoming Amateur Olympia Italy contest, Krizo is weighing 133.8-kg (294 lb) and looking stage-ready. Provided he earns the IFBB Pro card by winning the Amateur Olympia Italy, Krizo has a lot of opportunities to win a direct qualification to Olympia in the months to come. The 32-year-old will go after the 2022 Prague Pro win to earn the Olympia invitation. If he is unable to score a victory at the show, he will attempt to win the 2022 Romania Muscle Fest Pro in November and make his Olympia debut on Dec. 15 in Las Vegas.

Hunter Labrada Discusses How to Train Best as Enhanced or Unenhanced: ‘Pick and Choose Your Battles’