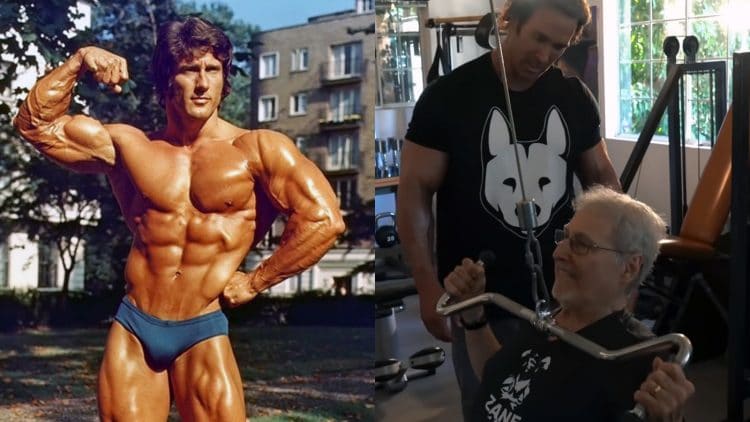 One is a three-time Mr. Olympia and the other has graced countless magazine covers – both are icons in the bodybuilding industry. Frank Zane and Mike O’Hearn linked up recently for a Golden-Era-inspired training session and there are lots of valuable tips and information to be learned.

Frank Zane, who’s won almost every major bodybuilding competition is known for having one of the most aesthetic physiques in history while the same could truly be said for Mike O’ Hearn, who is a four-time Mr. “Natural” Universe champion.

This workout of legends took place on the Chemist’s turf (Frank’s gym) in his California home.

During the workout, they only performed one exercise that was a Golden-Era favorite.

The favorite movement was a wide, neutral grip cable pulldown using a long curved bar attachment. Frank says it’s equivalent to doing a wide-grip pull-up which he doesn’t favor too much. But it is his favorite upper lat movement as he explained in the video. Because he can use a hammer grip it takes the stress off of his elbows compared to using a straight bar.

Zane also did a superset using bungee cordage that he attached to the cable machine which was used for rehabbing his shoulders but the bungee cord has good elasticity that helps him to get a good back contraction.

Of course, during the session, it was hard to not acknowledge all of the legendary images and trophies in the room. The same could be said for the equipment too.

After Mike finished a set of pulldowns he brought up whether there was enough equipment in the relatively small home gym to sculpt the “ultimate physique”.

“This is everything that I need,” said Zane.

Like probably anyone of us who’d get the opportunity to train with a bodybuilding legend would do, Mike popped the question… were the three trophies in the room, THE trophies.

You bet they are!

Frank explained that 1977 (first Olympia win) was the first year they gave out the Sandow trophy (Inspired by legendary Eugen Sandow) and then, of course, he collected the next two in 1978 and 1979.

“I wanted to go four in a row but I never made it”.

Zane would have liked to have won another Olympia in 1980, however, as he shared with O’Hearn, a tragic accident just weeks out from the Olympia caused him to compete at a lower body weight and he just didn’t bring the same look compared to the year prior

Life has a way of teaching us things…

“The thing I learned in bodybuilding is when you’re competing, you not only got to be better than everybody else but you have to be the best you’ve ever been.”

Frank admitted that he should not have competed because he was not an improved version of himself and that’s what is necessary to win such a massive title.

How Important Is Posing For Mind/Muscle Connection?

While Mike O’ Hearn is usually the one giving advice, this was his moment to learn tips and tricks from a bodybuilder who competed in the Arnold Schwarzenegger era.

As Zane was doing another set of pulldowns it sparked a question in Mike’s head which was how important is it to pose for exercise and getting that mind/muscle connection?

“It’s one of the forms of exercise, it’s static tension, isometrics,” Zane explained.

Isometrics, also known as static contraction training is a form of exercise that involves generating muscular force but without changing the length of a muscle.

An example of this is wall sits. Your muscles are tensing but they are not changing length unlike during a biceps curl that has a concentric (muscle shortening) and eccentric (muscle lengthening) phase, otherwise known as isotonic training.

Well, concentrating on tensing a muscle can have big carryover to isotonic training as mind/muscle connection is supposedly a very important aspect of increasing muscle size.

You want to be able to feel the muscles contracting but also focus on controlling the negatives.

But Why Do Most People Not Practice Posing Anymore?

It’s no secret that while the potential benefits of posing is nothing new, most don’t do it. But why ignore something that could add to your physique?

Frank’s response to that… “ignorance“.

He was willing to do what it took to be in an elite class and that meant not skipping anything including posing.

You can watch the full video here to listen to the more in-depth interaction.

Recognized for his longevity and aesthetic physique, Mike O'Hearn is a dominant force in fitness and bodybuilding. In a recent...

Lee Priest is a bodybuilding legend known for his activity and willingness to compete with anyone on stage. In an...