Mikhail Shivlyakov nearly had the record but it was just too much for him although, he did win the head-to-head against Terry Hollands by 1kg. 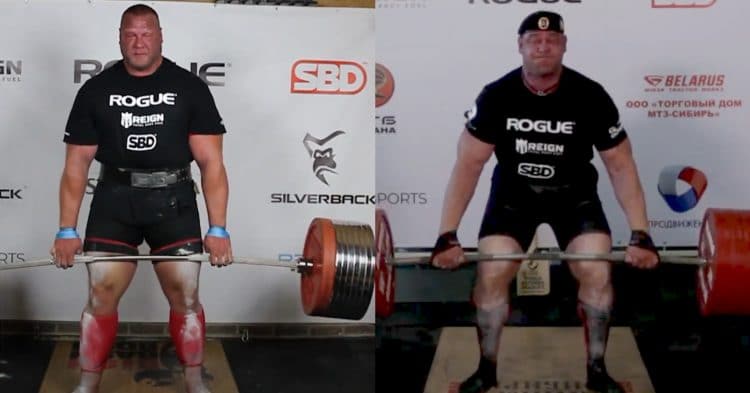 So far, several world records have been attempted as part of the World’s Ultimate Strongman ‘Feats of Strength’ Series. Some have been a success while others not so much. The most recent was the world record raw bench press attempt of 363kg/800lbs by the current world record holder Julius Maddox.

However, there was a misload during his first attempt which no doubt threw him off for the second attempt of which he was not able to complete. Maddox will no doubt be back and he’ll crush 800 lbs!

But this week’s world record attempt involved two elite Strongman athletes in Mikhail Shivlyakov from Russia and Terry Hollands from the UK who faced off in the Masters (Over 40) 430kg/947lb deadlift world record attempt. The event was free to watch on Coresports and the Rogue YouTube channel.

As usual, the event was hosted by Mark Body and Laurence Shahlaei while the legend Zydrunas Savickas was the referee. There were several in attendance to watch the head-to-head.

So first up was Shivlyakov who opened with 420kg/926lbs which was a lot of weight for a first attempt. It looked very shaky and unstable of which even Shahlaei mentioned that this wasn’t like him. He did complete the lift though.

Next up was Hollands who opted to open with 400kg/881lbs and he completed the lift without too much of an issue. Although, Shahlaei thought that Hollands probably felt he could have done better.

Then it was Shivlyakov for the second attempt of which he increased the weight to 421kg/928lbs and he pulled this one a lot smoother to complete the lift.

Hollands attempted 420kg for his second attempt and pulled it even better than he did the 400kg in his first attempt. So, both athletes made big improvements for their second attempts.

Then it was time for the 430kg/947lb world record deadlift attempt. However, they decided to go with 431kg/950lbs.

Hollands was first up but he could not lift the weight off the ground and that was it for his attempt. Then it was Shivlyakov’s turn and he managed to pull the weight above his knees but it was just too much for him.

Neither men could deadlift the 430kg but Shivlyakov was able to finish 1kg ahead of Hollands although it wouldn’t be counted as part of the head-to-head as 430kg was the number to hit.

You can watch the event below and here are the timestamps for each lift.