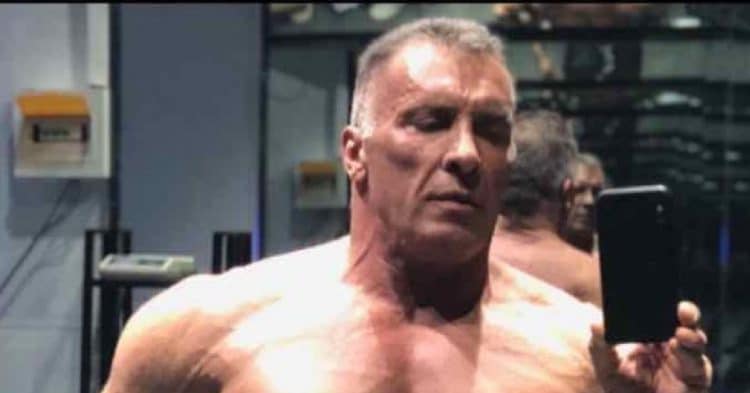 The legacy of Milos Sarcev is undoubtedly set in stone already. However that does not stop him from shocking the world with his unbelievable physique.

Milos’s career is deceptively good. Although he may not have gotten the amount of victories that some think he should have, it was not because he did not have what it takes. He just presented a more defined package to the stage, rather than mass monsters that were favored during his era. Nevertheless this did not stop him from competing in what was, at the time, more IFBB Pro shows than anyone else.

Most bodybuilder’s physiques tend to fall off the older they get, but this has not been the case for Milos Sarcev. The 56-year old Serbian bodybuilder has, for the most part, kept his jacked frame with no issues. This was on display recently, with a post to his Instagram. Here, he shows off his ridiculous physique after being shouted out by someone else, while giving some words of wisdom to his fans.

“When someone like @joeyswoll gives you a credit – priceless 🙏🏻💪🏻. I am actually working on improving at this stage of my life training hard with @erroldmoore and @matt_maldo_ 6 days per week. As Joey said – we can all look for a thousand excuses not to do what we could each and every day, lying to ourselves, being lazy…or we can do something about it…And, while you are doing “something” why not go ALL OUT? We can accept minimal results, optimal…but also shoot for a maximal results. It should be easy choice to make…YES, you can be in the best shape of your life – if you decide to do what you suppose to. How many intelligent people you’ve heard say it: I know that I am doing it wrong…!”. 🤔 Really? 😏…My question to all of them is – are you going to do something about it…and if not now – WHEN? ✔️Just Do It☑️ 😉”

Of course, Milos does not look like he did during his prime, it would be impossible for him to do so. However his trademark symmetry is still evident, and he is still super bricked up. Compared to this picture of him at the 1994 Olympia, there are clearly more similarities than differences.

The ability for Milos Sarcev to seemingly defy the aging process is second to none. He will never stop being an inspiration for those looking for a reminder that age is simply a number.