Hooper is working hard on his lower body for the upcoming Rogue Invitational competition. 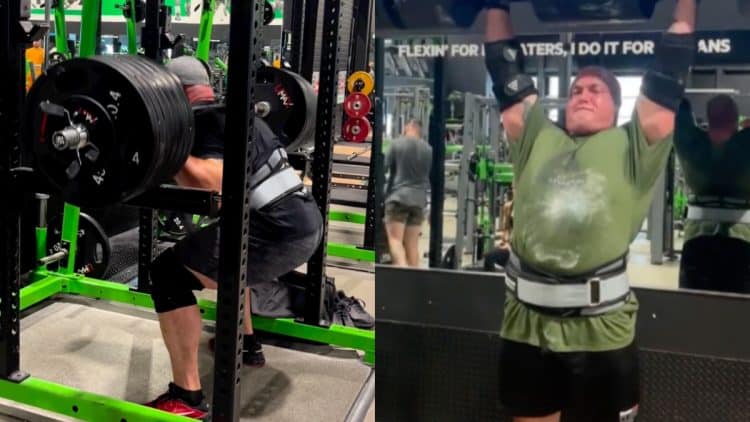 Mitchell Hooper is one of the fastest-rising Strongman athletes currently. He is still relatively fresh in the sport and has already shown a lot of potential. In a recent post made on Instagram, Hooper shared a video of him performing 5 reps of 695-pound (315-kilogram) on the squat, a personal best for him.

Mitchell is more renowned for his strength on the deadlift, but his squats are obviously not far behind. While working in Australia, Hooper participated in numerous amateur Strongman and Powerlifting competitions and won them all, setting multiple national records including a 1,047.2-pound (475-kilogram) deadlift at under 140 kilograms of body weight and a 511.5-pound (232-kilogram) Atlas Stone. He also won the 2021 Static Monsters Worldwide competition where he set a new World Record total of 1,477 pounds (670 kilograms).

After Rauno Heinla dropped out, Mitchell Hooper got the opportunity to make his professional debut and represented Canada at the 2022 World’s Strongest Man competition. He beat out seasoned professionals to win the qualifying heat and placed eighth in the show.

Due to his incredible performance, Mitchell Hooper earned an invite for the 2022 Giants Live World Deadlift Championships in Cardiff, Wales. He was aiming to break the All-Time World Record Deadlift, with the mark to beat standing at 1,104 pounds (501 kilograms) set by Hafthor Bjornsson. Although he only managed to lock out 1,000 pounds (453.5 kilograms), with just three years of experience in strength sports, Hooper secured the silver medal, falling just a point and a half shy of the winner, Pavlo Nakonechnyy.

In a recent post made on Instagram, Hooper shared a clip of himself doing 5 reps of 695-pound (315-kilogram) squats, setting a PR in the process.

Hooper can be seen performing the huge lift using a lifting belt and knee sleeves. The Canadian is currently in preparations to make his debut at the upcoming 2022 Rogue Invitational, set for Oct. 28-30 at the Dell Diamond Stadium in Austin, Texas.

Although he didn’t break the deadlift World Record in August, getting the Giants Live World Deadlift Championships runner-up prize so early in his career is sure to motivate him to train even harder.

Going by the training footage, Hooper looks to have improved even further despite being a newcomer to the professional stage. He has all the traits necessary to pull off an upset at this year’s edition of the Rogue Invitational and will only get better with time as he gains more experience.

How To Do The Pull-In (On Stability Ball)