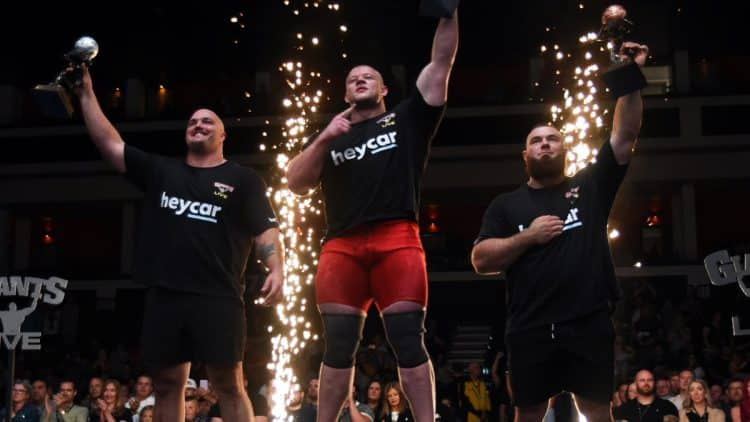 The 2022 Giants Live World Open & World Deadlift Championships took place on August 06, 2022, at the Motorpoint Arena in Cardiff, Wales. It gathered some of the greatest Strongmen in the world, some of which were deadlift specialists. The world’s best deadlifters were invited to break the World Record and put on one of the greatest Strongman shows ever.

Unfortunately, no one managed to deadlift 505 kilograms (1,113.3 pounds), but the remainder of the competition did not disappoint. After a tough battle with Mitchell Hooper, Pavlo Nakonechnyy managed to win the 2022 Giants Live World Open.

Everyone expected the Ukrainian to win this show, but Pavlo Nakonechnyy was probably not that man. Although Oleksii Novikov was the favorite for the 2022 Giants Live World Open, he only managed to get a third-place finish. The silver medal went to Mitchell Hooper despite his relative inexperience in the sport. It is hoped that his second-place finish motivates him to push even harder, since he was so close to winning.

Prior to the competition, very high expectations were set for this event, but only Rauno Heinla followed up on it. Rauno broke the Masters Deadlift World Record and performed the heaviest deadlift. Multiple athletes pulled 1,000 pounds, but no one came close to breaking Hafthor Bjornsson’s World Record.

The second event consisted of 150-kilogram Farmer’s for 10 meters. Giants Live then tasked the competitors with completing a loading medley consisting of three more implements.

Event two of the 2022 Giants Live World Open saw athletes make a complete switch from lifting heavy to moving as fast as possible. Pavlo Nakonechnyy beat Mitchell Hooper by less than one second, which started the incredible rivalry between them.

The Log Lift event of the 2022 Giants Live World Open was based on maximum reps with a 150-kilogram (330.7-pound) log. In addition, the competitors had 75 seconds to successfully lock out as many reps as possible.

As he is a bit lighter than the rest, Mitchell Hooper preferred the log for reps more than the max log lift event.  His preparation for this event was excellent, since he completed 8 reps to win. The Ukrainians stuck together and shared second place with 7 reps each.

The third event of the 2022 Giants Live World Open was the classic front hold, meaning that the athletes had to hold a 36-kilogram (79.4-pound) hammer with their arms extended straight in front of them for as long as possible.

Mitchell Hooper put on an impressive show, which proved that he is quite at home in events where he has to endure pain. Graham Hicks also had a really good performance, but he has proved multiple times that he is packing some bulletproof shoulders. Pavlo Nakonechnyy narrowly beat his fellow countryman, Oleksii Novikov.

Giants Live used the lighter stack of Castle Stones for this event, which means that the weight ranged from 100 kilograms (220.5 pounds) to 180 kilograms (397 pounds).

A blistering run from Pavlo Nakonechnyy meant that he overtook Mitchell Hooper in the last event and won the show. Unfortunately for Hooper, it seemed like the lack of experience cost him the win this time, but it is obvious that he is currently the greatest prospect in the sport.

The invasion of Ukraine clearly motivates their Strongmen to show the rest of the world how fierce they are. Just in the last few months, we had the chance to witness some incredible performances from Oleksii Novikov, Pavlo Kordiyaka, and now Pavlo Nakonechnyy, and he will certainly be delighted with how well he represented his country.