Liver King and Dr. Saladino issued a stern warning against foods that are 'devoid of the critical nutrients found in meat and organs.' 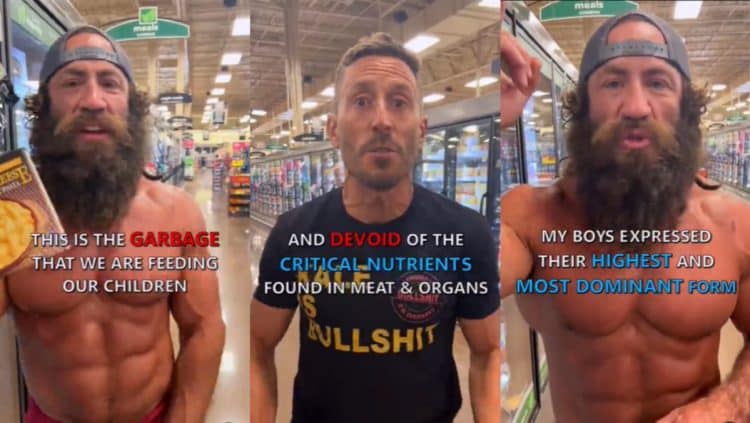 Brian Johnson, well known as Liver King, is on a quest to help others live a lifestyle reminiscent of our ancestors. In a recent Instagram video, Liver King teamed up with Dr. Paul Saladino to send a message to everyone about the dangers of processed foods and seed oils.

Liver King exploded in popularity over the past few years after adopting an ancestral lifestyle. In addition to eating raw organ meat, he preaches a number of ancestral tenets that he credits for helping him maintain a ripped physique and overall healthy lifestyle.

The 45-year-old is adamant that men have become soft due to the temptations present in modern society, like no longer having to hunt for meals. However, these pitfalls can be corrected by living an ancestral lifestyle, which he believes is consequential for achieving one’s ‘highest and most dominant form.’

While some have welcomed Liver King’s lifestyle with open arms, others have been less receptive to the message he’s relaying, podcast host Joe Rogan being chiefly among them. Rogan acknowledges the utility of carnivore-based diets but took issue with Liver King’s claim of being natural. The two have gone back and forth online for months. Nevertheless, Liver King would like to opportunity to speak with Rogan one-on-one.

Liver King has gone viral a number of times, typically due to his outlandish workouts and unusual eating habits. Whether he is encouraging others to eat raw organ meat or pound a stick of butter, the social media sensation’s unique lifestyle doesn’t appear to be going anywhere. In fact, he’s found so much success in the fitness industry that he’s approaching a nine-figure income.

Paul Saladino, who also goes by ‘Carnivore MD,’ teamed up with the organ-eating primal to discuss the dangers of processed foods and seed oils. He joined Liver King on his latest mission to help children who are “hurting, suffering and struggling” from what they describe as “garbage” food choices.

Liver King and Dr. Saladino Denounce Seed Oils and Processed Foods: ‘This is Not How We Build Healthy People or Healthy Families’

“💪 One of the easiest levers to pull is eating nose-to-tail… animal-based… the most evolutionarily appropriate diet for humans.

What our people are doing right now isn’t working. If we want to create a healthier population, we cannot ignore the quality of the foods we feed our children (or ourselves).

Anyone can make this change today… and feel the benefits tomorrow. When you do, we hope you’ll stand with us to help spread the message.

We owe it to our future generations. Let’s get f*cking to work!” wrote Liver King in the caption of his post.

During the video, Liver King pointed at a TV dinner before throwing it behind his back and starting a dialogue about the dangers of seed oils and processed foods.

“Primals Liver King here. This [points to TV dinner] is the garbage that we are feeding our children — that I was feeding my own children and they were hurting, suffering and struggling,” Liver King shared.

“Why are we feeding our children or ourselves garbage like this — full of seed oils, processed greens, and devoid of the critical nutrients found in meat and organs that nourish their brains and their bodies. This is not how we build healthy people or healthy families in any shape or form,” says Dr. Saladino.

Liver King admitted that he fed his children these types of foods but once he changed their diet, they became healthy.

“When we got rid of the processed foods, the liquid calories and the seed oils, my boys expressed their highest and dominant form and they got healthy and this is what all children deserve,” Liver King added.

Before concluding the video, Saladino added that children and adults perform better, look better, and feel better once they eliminate processed sugars and seed oils.

“I’ve seen this so many times. When animal meat and organs become the center of children’s or adult’s diets and they get rid of things with processed sugar and seed oils, they get so much better. They feel better, they look better, and perform better as humans,” says Saladino.

This isn’t the first time that Liver King has offered practical tips on living an ancestral lifestyle. A few weeks ago, the social media star sat down and shared some easy ways to connect with your primal self. These measures can be as easy as holding a partner’s hand or connecting with the earth by not wearing shoes for an extended period of time.

With North America’s growing obesity problem, which extends to children, Liver King and Saladino’s message of eating healthy is a valuable one. While he’s yet to sit down with Joe Rogan, it appears Liver King is still finding unique ways to spread his message of ancestral living with the masses.