Rauno Heinla is the second athlete to withdraw from this year's WSM, but his replacement has already been announced. 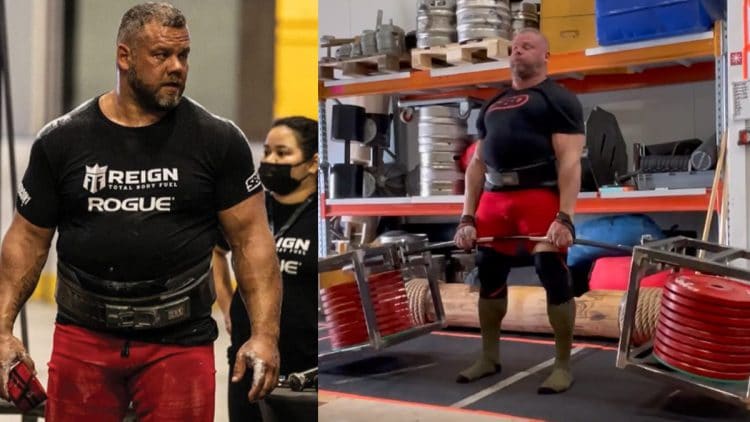 The 2022 World’s Strongest Man contest will take place on May 24-29, in Sacramento, California. However, Rauno Heinla has just announced that he won’t be fighting for the most prestigious title in the 2022 WSM contest. Rauno was one of the first athletes revealed for this competition, but it is now official that he has withdrawn.

Rauno Heinla has been very unlucky with his injuries and setbacks lately, having withdrawn after the third event at the 2022 Europe’s Strongest Man. This year’s WSM contest would be his second time competing at the highest stage, but he will now have to wait a bit more. It is not clear what the exact reason for Rauno Heinla’s withdrawal is, but according to him, it has something to do with his recent 536.6 kg (1183 lbs) silver dollar deadlift.

I did a silver dollar deadlift and got a problem with my stomach. I was 3 days in the hospital, will not specify details…

Now I need to take easy 2 months and then I will start again roads to my goals💪and my goals are still big😎.”

Who will replace Rauno Heinla?

Although this situation is very unfortunate for Rauno Heinla, it serves as an opportunity for Mitchell Hooper, who has been officially announced as his replacement. Mitchell seems like a perfect man to fill Rauno’s place, as they are very comparable. This will also be Mitchell’s first WSM contest, so it means a lot to him.

Like Rauno Heinla, Mitchell Hooper is mostly known for his deadlift prowess. Both men have easily pulled in the excess of 1000 lbs (453 kg), but Mitchell earned an invite to the 2022 Giants Live World Deadlift Championships, which will take place on Aug. 5-6 in Cardiff, Wales. Mitchell will attempt to break Hafthor Björnsson’s All-Time World Record and is aiming for a 505 kg (1113.3 lbs) deadlift. Furthermore, the 2022 World’s Strongest Man is heavily rumored to feature a deadlift event, so that would be an exceptional event for him.

The 26-year-old Canadian started his strength career in powerlifting, by winning all three sanctioned competitions in which he took part. In the process of doing so, Mitchell Hooper lifted some mind-blowing weight, and decided to start Strongman. The 2022 World’s Strongest Man will be his first major competition, and there is no doubt that he will be a great replacement for Rauno Heinla.

Rauno Heinla will unfortunately not get the chance to compete at this year’s WSM after trying to secure his place for over 10 years, as his only participation in the most coveted Strongman competition came in 2011. However, Mitchell Hooper could be a major upset, as his training footage looks extremely impressive. It is evident that he possesses immense static strength, but is also a very rapid athlete.