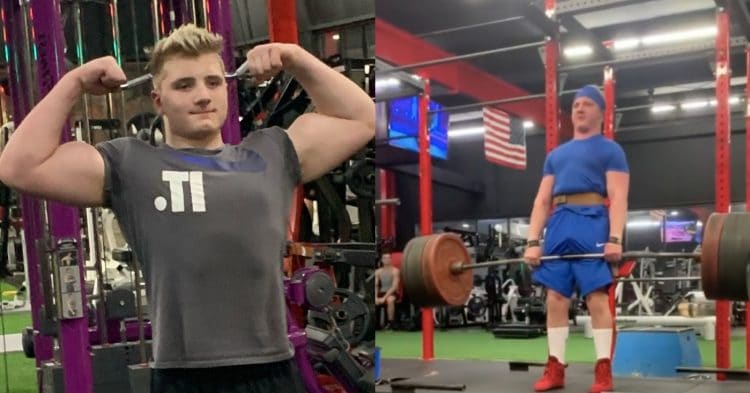 Few people have shown the type of natural strength that Morgan Nicholls has shown in his short time in the weight room. He is barely 14 years old, and has already broken into the 500lb deadlift club.

To say that Nicholls is talented would be beyond an understatement. Early into his teenage years, he has already shown the type of raw talent and power to potentially be the brightest prospect in the incoming generation of lifters.

Even at 13 years old, the son of bodybuilding coach Chad Nicholls was already turning heads with his epic strength. This was perhaps most evident with his incredible deadlift and bench press combo from early last year.

Now Morgan Nicholls is a little less than a year removed from that performance, and it is clear that he has been hard at work in this time away. It would seem that he is looking to make the most out of 2021.

The first step in this potentially massive year for the young athlete, came with a recent post to his Instagram. Here the phenom was seen landing an absolutely massive 500lb deadlift, scoring a 45lb personal record.

This was an absolutely stunning performance from Nicholls, and one that shows just how skilled he is already. Currently he has just one meet on his record, but he looks to be preparing to make his return to the platform.

It is not just his deadlift that Morgan has been getting better at, either. Here is the fourteen year old just a few days earlier, hitting a super respectable 345lb bench press triple, working on making some gains.

The crazy thing about how talented Morgan Nicholls is already, is the fact that powerlifting is not even the only sport he does. The high school student still is a running back for his football team, and discus thrower for track and field.

There is also the potential of him turning to bodybuilding. After all, he is the son of Chad Nicholls, who has coached several Olympia champs like Ronnie Coleman and the most recent champ Big Ramy.

With him still being at such an early age, time will tell if he chooses to put his focus into just powerlifting moving forward. If this does end up happening, then he will almost certainly become one of the sport’s best athletes in virtually no time.

Get More From Your Workouts with Supersets: The Ultimate Guide