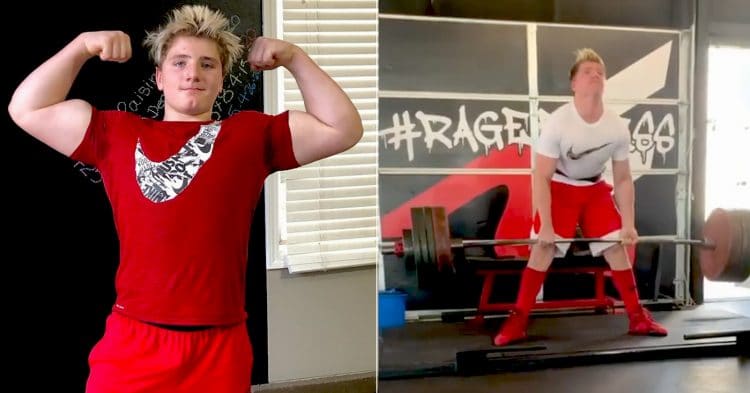 It would appear that Morgan Nicholls is a name that the powerlifting world will be familiar with for a long time to come. The 13 year old powerlifting freak has been blowing minds with his lifts, and is only getting better.

It is not often that someone can get the attention of bodybuilding great Ronnie Coleman, before they hit their teenage years. But that is precisely what happened to Morgan, who got the Mr. Olympia champ’s notice for being able to squat 405lb, at just twelve years old. Although this comes as little surprise given the boy’s upbringing; being the son of former Ms. Olympia Kim Chizevsky and Chad Nicholls, who used to coach Ronnie.

Now, Morgan Nicholls is 13 years old, and just as he gets older, he gets bigger and stronger. This was evident big time recently, with some posts to his Instagram. Take this first one for example, where this young stud crushes an enormous 335lb paused bench press, scoring a new personal record.

When Morgan hit this lift, it was an improvement by a whopping 60lb from the PR he set around the same time he was getting Coleman’s attention. So in just 5 short months, he has improved immensely. It isn’t just his bench either, as about a month earlier he score another PR by running through a wild 445lb deadlift.

One of the craziest things about Morgan Nicholls is how quickly he is getting better. Although that is to be expected, given he is far from physically mature. This just serves as further evidence that the next generation of powerlifters is going to reach levels in the sport that we have never seen before.