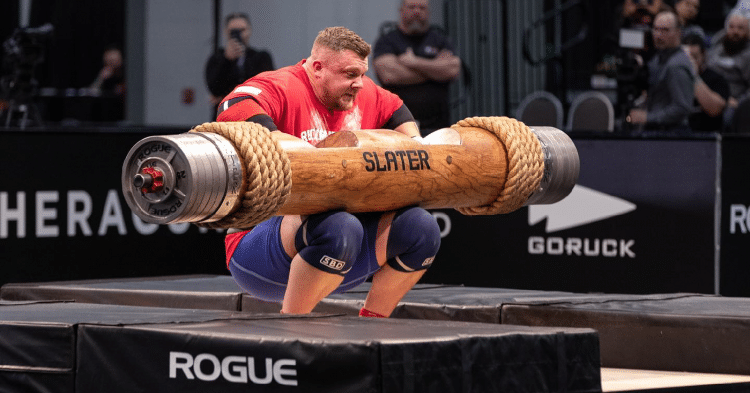 This weekend, Luke Stoltman will be attempting to etch his name in strongman history, by setting a log lift world record. This is how you can watch his attempt at the record live, online.

As the elder of the Stoltman brothers, Luke often leads the charge on accomplishing big athletic endeavors. He was the first of the two to win Scotland’s Strongest Man, and to qualify for the World’s Strongest Man. Although his brother Tom is just as skilled and talented, the world knew Luke’s name first.

Luke Stoltman will be looking to boost his stature big time this Saturday, when he goes for a new world record. As part of the World’s Ultimate Strongman “Feats of Strength” series, the Scottish strongman will attempt to do a 228kg log lift, which is 2kg heavier than the current record. The world record attempt will go down via live stream, similar to Hafthor Bjornsson’s world record deadlift, and streamed on CoreSports.

Luke will be using a wooden log to attempt this record. The stream will start at 12pm ET/4pm GMT, and will be free to watch. Although this is a record that Stoltman has already proven able to surpass, doing so in training.

This time around, there seems to be much less controversy surrounding the circumstances of the world record lift. Of course, it should be noted that Zydrunas Savickas, the man who’s record Luke looks to take, did speak out about Thor’s deadlift attempt. He was not the most vocally outraged athlete about the situation, bit he did show some hesitation in referring to these lifts done outside of competition, as legit world records.

Good luck to Luke Stoltman on his attempt at a new world record. Stay tuned to FitnessVolt for updates this weekend, as he gives it his best shot.