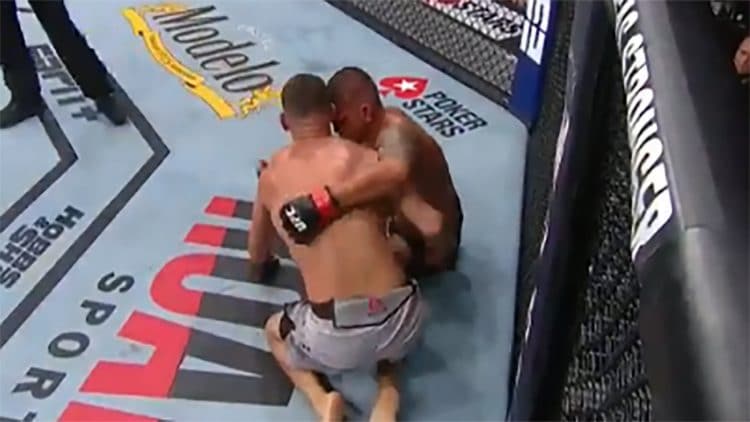 UFC 241 PPV (pay-per-view) went down live this Saturday (August 17, 2019) from inside Honda Center in Anaheim, California, the USA. The promising Welterweight bout between the TUF 5 Lightweight winner Nate Diaz and the former UFC and WEC 155-pound kingpin Anthony “Showtime” Pettis co-headlined the event. The referee was Mike Beltran.

Nate kicked off aggressively, and he was cutting the distance all the time, not letting Pettis land his dangerous kicks. Pettis circled the most of the round, but Nate clinched up many times and landed a lot of short strikes, and even secured a takedown.

The second round brought the same tactics from Diaz. Mike Beltran stopped the match due to an eye poke, but it was quickly restarted. Nate took Pettis down again and mauled him on the ground during the last two minutes of the frame.

Pettis started the third round aggressively, he went for all or nothing, but then Nate pressed him against the cage. After a spinning back fist miss, Diaz landed three strong knees and knocked Pettis down, but “Showtime” survived. Fighters were rolling down the canvas, but there was not much action, Nate kept his rival in the full guard well, and secured a dominant decision win.

Pettis slaps the guillotine on, but Diaz escapes! #UFC241 pic.twitter.com/5KxhKggYPe

Diaz is teeing off on Pettis as round 2 comes to a close!#UFC241 pic.twitter.com/oB6cmHTcl7

"I want to defend my title against Jorge. He's a gangster, but he ain't no West Coast gangster."@NateDiaz209, welcome back! #UFC241 pic.twitter.com/Y5DdHcnwzO