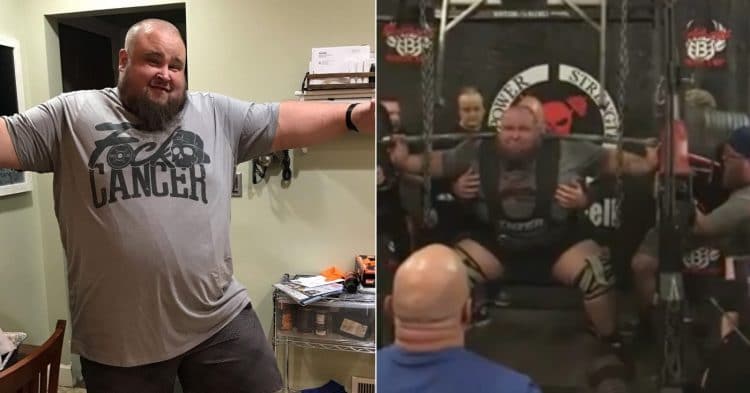 While Nathan Baptist may not be as much of a household name as other powerlifters, he is proving himself to be one of the best in the world. He did that again recently by extending his world record for his equipped squat.

In the more than a decade since Baptist has been competitively powerlifting, he has never come in a lower place than first. He is one of the best super heavyweight powerlifters in the world, with a resume to back it up.

It had been just over a year since the last time Nathan had competed, before last weekend. However he decided to make his return on February 6th, at the UPA Utah Kick Off Meet, in Clearfield, UT.

It was at this meet that we got to see Nathan Baptist extend his world record for equipped squat. He did this by hitting a 1311lb (594.7kg) squat, while waring a multi-ply suit and knee wraps, and looked impressive throughout.

Video of the world record setting performance was captured and uploaded to Facebook by Nathan’s father, Gregory. Here he complimented his son, saying how proud he was of the performance.

so proud of my son Nate Tractor Baptist and his world record squat 1311.7 lbs

This was an absolutely epic performance from Nathan, but as previously stated this was not his first time tasting world records in the squat. In fact, it had not been all that long since he previously set the world record.

Around six months back, Baptist hit a 1287lb (580kg) squat, at the 2020 edition of the UPA Utah Kick Off Meet. Again, this was while wearing a multi-ply suit and knee wraps.

If you missed his previous world record achievement, you can check it out below. From there, it is quite easy to tell just how much he has improved between that performance and this most recent one.

With this record behind him now, it is clear that Nathan Baptist is still making some serious gains. He is not nearly as active as some would like to see, but without a doubt, when he does compete it is absolutely worth watching and paying attention to.

At 36 years old, Nathan is looking better than ever, as this new world record will show you. It is unclear if he will look to stay busier this year, than he has in the last few, but if he does compete more you can trust that we will be watching closely to see what he is able to do next.