During a recent Q&A session, Brian Shaw was graded Hafthor Bjornsson's performance in his exhibition boxing match, and gave his thoughts on how the fight with Eddie Hall will go 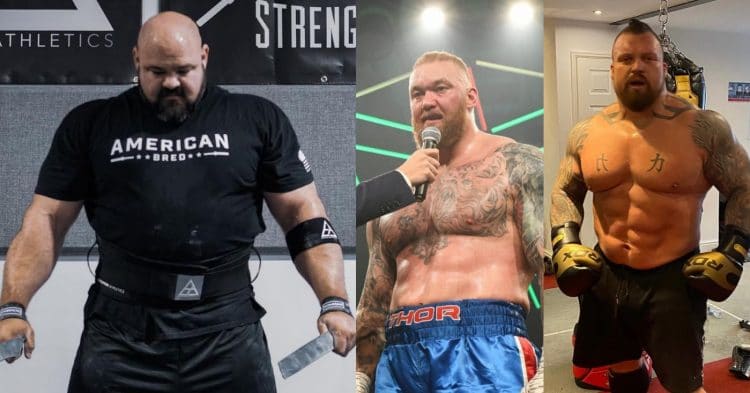 Over their years of strongman competition, Brian Shaw has become quite familiar with both Hafthor Bjornsson and Eddie Hall. Now he explains how he thinks their boxing match will go down, and gives his thoughts on how both men look so far.

It would be fair to say that Shaw has a much better relationship with Hall, than he does with Thor. He and the Englishman are friends and are routinely seen doing videos together and teasing each other during contests.

That being said, Brian is still hedging his bets when it comes to Eddie’s boxing match with Bjornsson, this September. He knows that both men will carry extensive power, but he has been leaning towards Eddie.

Recently, Hafthor Bjornsson had an exhibition boxing match to get his feet wet in the ring. This bout ended in a draw, with the Icelandic strongman getting a knockdown, after hitting Steven Ward in the shoulder with a heavy punch.

Speaking in a recent Q&A session on his YouTube channel, Brian Shaw was asked who he thought would win between Bjornsson and Hall. While he still leans towards Eddie, he did grade Hafthor’s performance in the ring, and cautioned people to not look past Eddie.

“Hafthor obviously had an exhibition fight, that was broadcast and shown. I didn’t personally watch it, although I did see a few highlights of that fight,” Shaw explained.

“I’m not a boxing expert, so from what I saw, it seemed like he still had quite a bit to work on, compared to some other boxers that I have watched.

“Eddie on the other hand has not put a lot out there, but what you guys need to understand about Eddie Hall, is he is only going to put out what he wants people to see.

“Eddie is working in silence, aside from what he is putting out there, so it’s tough to gauge where he’s at, but if I know Eddie Hall, I know that he is working incredibly hard and he has dedicated himself to this. So he is probably a lot further ahead than what people may think.”

Some have said that Eddie Hall needs to have some exhibition fights like Thor, to get used to the idea of boxing. However Brian Shaw seems to side with Eddie’s coaches, who want to hold off on that type of thing until closer to the fight.

Moreover, Brian said that there is a possibility that Eddie could be doing sparring or smoker fights behind closed doors, without uploading it to social media to be picked apart by critics.

“As far as the people saying Eddie needs to have an exhibition, he needs to put that out there, it’s a double edged sword, right?” Shaw said.

“Number one, we don’t know that he might be doing exhibitions behind closed doors, to learn and to watch the video.

“But when you do an exhibition match that everybody can see, obviously Eddie’s camp can see what Hafthor’s doing, and literally Hafthor just displayed all of his abilities with that exhibition.

“So now they can plan for what Hafthor’s tendencies are, where he’s going to move, how he’s going to react, that type of stuff, so you kind of show your full hand.”

“But on the other hand, like I said, double edged sword, Hafthor got game experience that can potentially help him,” Shaw added.

“I think at this point, based on what I’ve seen and heard, I would still tend to go more toward Eddie, but it’s great to see Hafthor throwing that out there. I think it builds some more hype for their fight.”

Who do you think will win between Hafthor Bjornsson and Eddie Hall? Do you agree with Brian Shaw and his assessment of each man?

11 High-Calorie Low-Carb Foods to Include in Your Diet