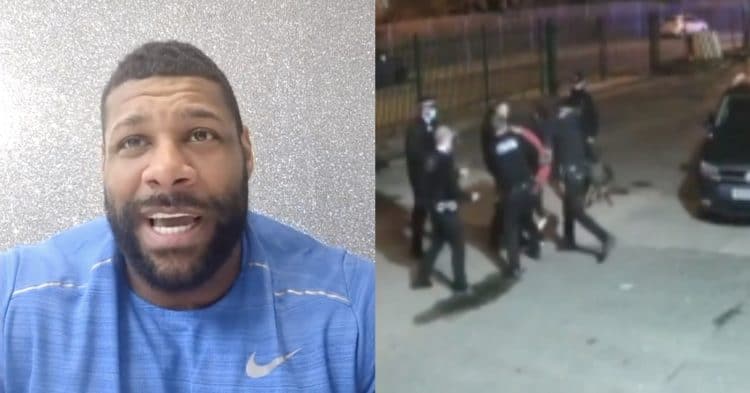 Recently some concerning video emerged of bodybuilder Nathan De Asha being violently assaulted while handcuffed by law enforcement. Now he explains the circumstances that led to his arrest, and what went down that day.

For the last several months, De Asha has been fighting to keep his gym open, amidst the global pandemic and lockdowns in the UK. This has already led to numerous run-ins with police, eventually leading to him being fined for staying open.

Things got taken to a new level earlier this week, as Nathan was seen being placed in custody by police. The video he shared saw him getting violently assaulted while already handcuffed, causing concerns among fans.

What Happened To Nathan De Asha?

With little context behind this video, fans were wondering what happened to Nathan De Asha. Speaking in an interview for the first time since the incident, he broke down exactly what transpired.

According to Nathan, he had been operating his gym with a few patrons inside. He wanted to provide an outlet for people during these tough times, to help with mental and physical health, before police showed up at the gym to say that they had reports of him holding people against their will.

“The police then come along and say ‘We had a phone call that Nathan De Asha is kidnapping a young lady and holding her against her will.’ I said ‘If they’re in there, they’re free to go,'” De Asha explained.

“They said ‘Look, we have all of Merseyside police ready to pounce on the gym because it’s a kidnapping charge now, and you’ll get up to ten years in jail. You’ve had previous convictions Nathan, so you’re looking at ten years.'”

Nathan De Asha goes on to explain that he tried to tell the officers that he was not kidnapping anybody or holding them against their will. The police told him that if the six people inside the gym came out, they would get fines and he would not be arrested for kidnapping.

He went inside to tell the people in the gym what the police said, even offering to help the people pay for whatever fines they would get. So the people started to leave the gym, but they were greeted with pepper spray and batons.

“I’ve got two sets of handcuffs on me, and as you can see in the video, the gentleman lines up to knee me. He goes for the knee, and I didn’t even put a real fight up.

“I just moved my shoulders, as you can see I hit one in the back with my shoulder, and he falls over. I’m just trying to push them back, that’s all I’m doing.

“You can see them kicking me in the back and the head, standing on my ankles, and then one of the officers comes over and points the cameras.”

“You can see that when they point the cameras, they all disperse and then we got arrested,” De Asha continued.

“They then got a Section 18 order which allows them to enter the premises because we’re in custody, for drugs and what not. So they came into the gym and basically helped themselves to whatever they wanted.”

From there, Nathan De Asha explained that he has some things missing form his gym, that his camera footage will show if it was one of the patrons or officers who took it. All in all, he says that this is an abuse of power by the government.

“As you can see now, it’s gone worldwide. It’s more than corona, it’s an abuse of power. It’s a power trip by the UK government,” Nathan said.

Someone Got Their Leg Broken

Apparently Nathan De Asha was not the only one to leave this situation with some injury. Apparently while running from the police during the scuffle, one of the patrons of the gym got their leg broken.

“So the police told everyone ‘Listen, come outside and we won’t petrify no one, we won’t assault nobody, we’ll just give everyone fines,'” De Asha said.

“A lot of people were scared, they ran away. A young gentleman in the video snapped his whole leg in three, you could see the bone. He’s looking to save his leg, it was just hanging off.

“(It snapped) just from running away from the place. He’s hurt his leg, they’re chasing him and they tell him to stop. He’s then slammed on and the bones come through the tracksuit.

“When they saw him on the floor they just left him because they knew he couldn’t go nowhere. Then my friend picked him up, put him in his car, and his leg was just dangling.”

De Asha explains that the person can not feel his toes currently, and that Nathan is offering to do what he can to help. That being said, the young man is apparently staying positive, which is good to hear.

This was a disturbing situation for Nathan De Asha to find himself in. He understands why the police were worried for their safety when he is as big as he is, but when he was handcuffed there was no reason for the excessive force.

For now, he is on bail for numerous criminal counts which he has to go to court for in March, and they are still trying to shut his gym down. However he is not going to close his doors, even in spite of these recent troubles.

What do you make of this situation with Nathan De Asha?

11 High-Calorie Low-Carb Foods to Include in Your Diet