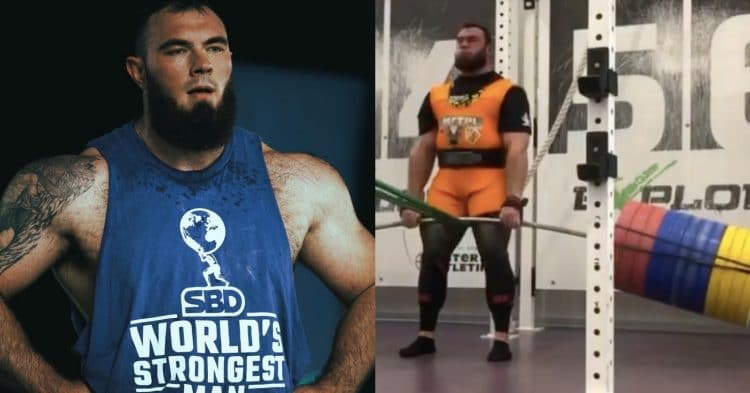 At just 24 years of age, Oleksii Novikov has already proven himself to be an absolute beast of a man. Now, as he prepares to make an attempt to win the World’s Ultimate Strongman Strength Island contest, he had an epic performance in the gym.

Heading into the WSM last year, few were looking at Novikov as a serious threat to the throne. In part that was due to his young age, but it was also due to the attention placed upon the likes of Brian Shaw.

In the end, not only did Oleksii go on to win the event, but he set a new world record along the way. He became tied for the youngest person to ever be named the World’s Strongest Man.

Now Oleksii Novikov is looking to get back to action at the World’s Ultimate Strongman Strength Island event, set to take place on February 27th. This will be his first contest of the year, going down in Bahrain.

While he is capping off his prep for the first major strongman contest of 2021, the Ukrainian posted a video to his Instagram of how his training is going along. This clip sees him deadlifting a massive amount, pulling every single plate in the gym, which he had to tie down on the barbell.

“One of the auxiliary deadlift exercises.
These are all our plates on the bar, so we will buy more to lift more))
And the coach @sergei_osipchyk spells the barbell to make it easier to lift)))
This is how the training days go on😉”

That was an insanely impressive performance out of the young strongman champion. Of course, Novikov is known for his deadlifts, particularly the silver dollar deadlift, but this was a new level of skills.

Now this is not the first contest that he will be taking part in since the 2020 WSM. He also competed at the first ever Shaw Classic, where he came in third place behind Brian himself, and JF Caron.

This time around, Novikov is looking to seal up all the holes in his game, which has led to him having these types of intense training sessions. He has been doing a montage of workouts, each being well rounded to help level up his overall skills.

With him being so young and already proven as one of the best strongman athletes in the world, Oleksii Novikov is one of the most interesting people to pay attention to this year. It will all start with the Strength Island event in just a few weeks time.