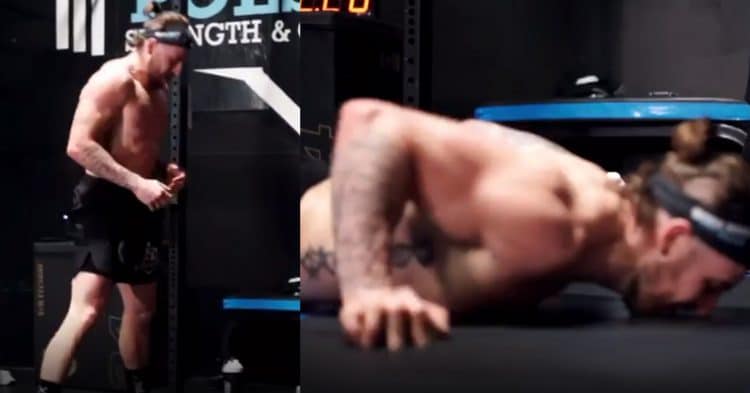 This past weekend, Canadian CrossFit coach Nick Anapolsky blew minds by breaking a Guinness World Record ® of burpees, performing a CrossFit staple known as burpees. That includes a chest-to-ground movement, which Anapolsky performed 879 times in one hour. He set the record on Saturday, March 6, 2021, at the CrossFit affiliate that he owns, Polsky’s Strength & Conditioning in Kitchener, Ontario. It came after a long period of work, that included training goals. Anapolsky set specific goals on how many he wanted to hit to beat the previous record, and exactly how he was going to do that.

To make the record, Nick was required to have his chest touch the ground and his arms fully extended with each rep. He was also required to perform a hop from standing but could keep his arms at his sides. The feet requirement was to have them travel half his height with each rep.

That distance was measured, and he had a required tape marking on the floor to note where he needed to perform the movement.

What a crazy experience. Thanks to everyone who sent me messages for this silly challenge. The hour was full of ups and down (literally) but I got through it knowing I had my PSC community behind me and everyone else who was cheering me on.

How He Did It

In training, Nick Anapolsky had set the goal of making 15 burpees per minute. He set a goal of 10 to 12 seconds of rest between each minute. His overall goal was to hit a total of 900 burpees. The record for most chest-to-ground burpees heading into the event was 870, a record set by Macauley Jones of Australia, 1994.

Nick’s mindset was to take a sprint-stop approach, which meant taking a rest period of a few seconds in between each minute. He took this approach over going straight through for the 60 minutes. Taking a brief rest in between rep sets is a common technique used by CrossFitters.

Anapolsky has been using CrossFit techniques in training for some time and has been in the CrossFit Games since 2015. To break the last world record, Anapolsky trained with fellow CrossFitter Bronwyn Stevens as his support. He had trained with Bronwyn for weeks prior to the World Record attempt.

His training plan is a winning one if he attempts to break his own Guinness Record. Now, as the next 2021 CrossFit season opens, he can go in with the Guinness Book of World Records title to his name.