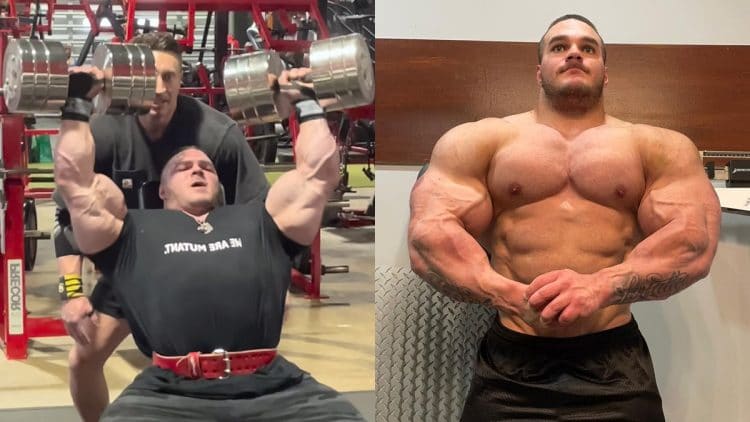 2021 Arnold Classic winner Nick Walker is ramping up his off-season preparation for his return to the 2022 Olympia schedule to take place from Dec. 16-18, 2022, in Las Vegas, NV. In a short period of time since earning the IFBB Pro card, Nick Walker has gained a lot of momentum and the necessary experience to compete at the highest level of professional bodybuilding. On April 17th, Walker shared a video of him hitting a 165lbs seated dumbbell shoulder press for 10 reps in the Gym.

The 27-year-old firmly believes that competition prep alone cannot produce miraculous results. He has stated on multiple occasions that a bodybuilder’s performance on stage is the result of his hard work during the off-season.

The Mutant’s training is steadily picking up the pace. In a recent session, Walker did 10 reps of dumbbell shoulder press during a shoulder workout session as a part of his off-season training. Walker completed the first nine reps with perfect form. However, the weight of the dumbbells was being felt more and more with each rep. His spotter Evan Wells gave the support at a perfect moment and Walker managed to complete the tenth and final rep because of him.

“The past few months mentally I was pretty out of it. But now I’m back, I’m where I belong now.

165 pound shoulder press for 10 reps,” Nick Walker wrote in the caption to his post.

Nick Walker and his off-season training

Nick Walker last competed at the 2021 Olympia and finished fifth in the Open Pro division. The 27-year-old had started his professional bodybuilding career with a fourth-place finish at the 2020 Chicago Pro. He then won the 2021 New York Pro and the 2021 Arnold Classic within the next few months.

In his first-ever Olympia appearance in 2021, Nick Walker finished fifth in the Open Pro division. While it was certainly a respectable standing for a relative newcomer in the sport, the 2021 Olympia results also highlighted the fact that even the most promising prospects cannot have an easy road to the top against the elite competition.

Walker chose to take the time off to prepare his physique for the 2022 Olympia. While the extended break certainly gave him the time to make meaningful gains, it also became the longest off-season of Nick Walker’s bodybuilding career. Walker admitted that he felt he was overtraining and lost the momentum to train.

However, he went through a deload week recently and has started ramping up the training. Another change in Nick Walker’s training schedule is the incorporation of more rest days to allow his body to completely recover. As of now, Nick Walker is following up every two working days with one rest day. However, the ratio will change or remain the same depending upon how his body and mind feel.

Terrence Ruffin Understands Risks of Bodybuilding, Plans to Retire in Next 3 Years