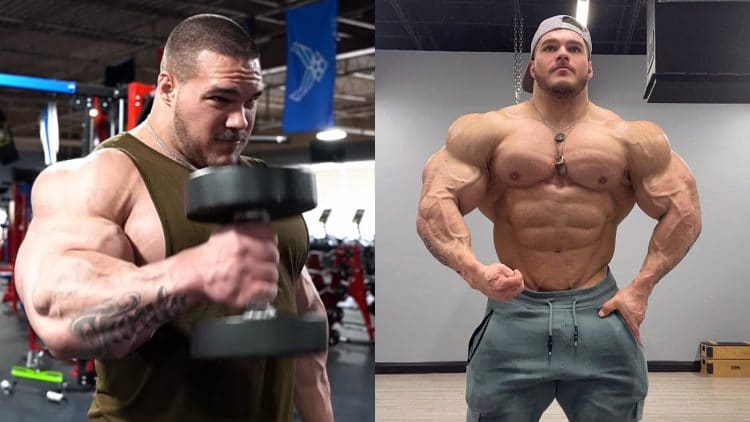 IFBB Pro bodybuilder Nick Walker recently shared his biceps and chest workout. The 27-year-old firmly believes that real gains are made during the off-season training and he has kept himself busy one year removed from Mr. Olympia 2022. Recently, Walker joined hands with Kyle Wilkes for a chest and arms workout at the Performance Strength Academy in Hamilton New Jersey, and shared the video of this workout on his YouTube channel.

During the opening comments of the video, Nick Walker explained that the workout sequence was not pre-decided. However, Walker and Wilkes went through the chest and biceps workout with the goal to get a good pump in the muscles.

Nick Walker and Kyle Wilkes started the day with a chest workout and went on to work the biceps afterward. Walker believes that arms respond better to moderate weight with a higher number of reps. In the closing comments of the video, Nick Walker explained:

“I like to keep the reps a little higher for arms in general. I feel especially at this point, it doesn’t hit my joints as hard and doesn’t hurt my elbows as much. I’m able to contract the muscles even harder and get the pump versus trying to curl 80lbs dumbbell and get nothing out of it.”

Nick Walker won the 2021 New York Pro and 2021 Arnold Classic within one year of earning his IFBB pro card in 2020. Walker then went on to finish the year with a fifth-place finish at 2021 Mr. Olympia. Nick Walker looks stage-ready in his most recent physique updates. His recent gains coupled with his track record in the professional competition so far had assured everyone that Walker would probably dominate most pro shows in 2022. However, Walker’s decision to not compete at the 2022 Arnold Classic came as a surprise to any.

Nick Walker recently opened up about his decision to stay out of the second most prestigious professional bodybuilding competition. In a lengthy Instagram post, Walker explained his reasoning behind the decision and summarized that he does not want to compete against the top guys of the sport without making solid improvements.

“With the guys that beat me at the Olympia, it just doesn’t make sense to continue to compete without making the improvements needed to beat those guys at the Olympia. I need the off-season to make big improvements for the Olympia 2022. Speak it into existence- Olympia 2022, I’m coming for it all,” Nick Walker wrote in the caption to his post.

Judging by his comments and ongoing preparations, it seems likely that Nick Walker will not get on stage before 2022 Mr. Olympia.