After tearing his quad at the first event, Nicholas du Preez managed to rack up over 2,000 pounds. 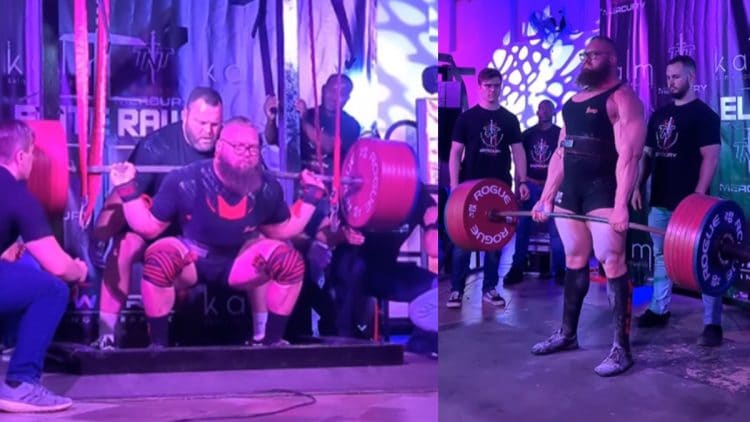 The 2022 RPC Elite Raw took place on May 14, in Pretoria, South Africa, and Nicolaas du Preez put up a stellar performance despite encountering a major setback. Nicolaas won the Men’s Open division after totaling 1037.5 kilograms (2,287.3 pounds). His official outing on the powerlifting platform was highly anticipated, but Nicolaas was not able to get the results of which he was capable, having suffered an injury at the first event. Nicolaas competed in the Raw W/Wraps division and the 125-kilogram weight class.

Nicolaas du Preez started the competition with a staggering 430-kilogram (948-pound) squat. Unfortunately, this is where he tore one of the muscles in his quadriceps, which majorly affected him later in the competition.

Nicolaas du Preez continued the competition with a 237.5-kilogram (523.6-pound) bench press. He was able to press 245 kilograms (540 pounds), but it was not deemed as a false lift, as Nicolaas lifted his buttocks off the bench.

Nicolaas du Preez was in a great position coming into the deadlifts, as his training footage from the past weeks proved that it was one of his greatest events. However, his injury prevented him from lifting as much, and he ended up with a 370-kilogram (815.7-pound) deadlift.

You can watch his lifts here:

Ultimately, it seems like Nicolaas du Preez has done everything right leading up to this competition. So it is very unfortunate that the injury struck him at the start. While watching his lifts from this contest, it is very clear that he is capable of doing much more.

Apart from the incredible achievement of winning the show and lifting some massive weight, Nicolaas du Preez has shown his amazing character and determination. He pushed through an injury and won the show, so the future is looking very bright for him.