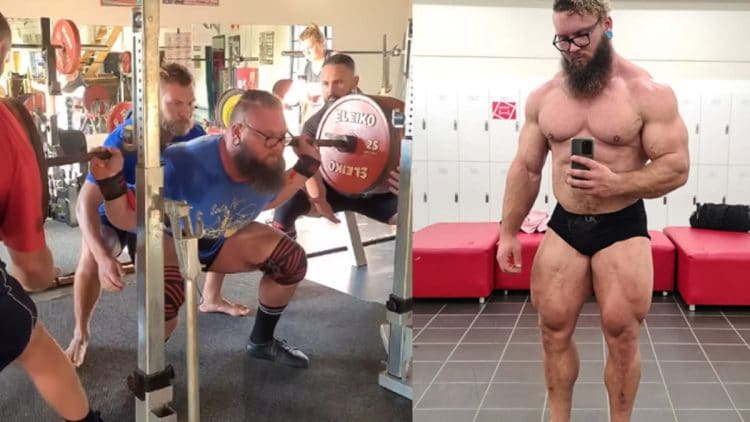 Nicolaas du Preez has not taken part in a sanctioned powerlifting competition since March 2021. However, he is now turning heads with his massive lifts in training and seems absolutely ready to step on the platform once again. Nicolaas’ most recent Instagram post from May 2, 2022 displays one of his greatest squats ever. In the video, Nicolaas can be seen easily squatting 420 kilograms (926 pounds) in training.

Nicolaas’ squat is not raw by powerlifting standards, as he used knee wraps, a lifting belt, and wrist wraps to aid him in the lift. However, Nicolaas intends to compete in the raw with wraps division at his next meet. Although Nicolaas’ walkout looked very shaky, his lift seemed to be very comfortable. The 420-kilogram (926-pound) lift is also the same as his current official (done in competition) PR.

“Wasted a lot of energy, at several instances, that’s all I can say. Still moved well so eh 🤷🏻‍♀️. Last squat before #EliteRaw. Time to rest up. 12 days out.”

Nicolaas will enter a competition in just 11 days, as he plans to take part in the 2022 RPC Elite Raw powerlifting competition. It will take place on May 14, in Pretoria, South Africa. He has been maintaining a bodyweight of 125 kilograms (275 pounds) since the start of his preparation, so he will be competing in that weight class.

What to expect from Nicolaas du Preez?

A lot can be expected from Nicolaas du Preez in this competition. In the last few weeks, he has deadlifted 405 kilograms (893 pounds) on a stiff bar, bench pressed 255 kilograms (562.2 pounds) with ease, and now squatted 420 kilograms (926 pounds) with wraps. So it seems like Nicolaas could total over 1,050 kilograms (2,315 pounds), which only Zahir Khudayarov and Eric Lilliebridge were able to do in the 125KG weight class.

If anything, Nicolaas du Preez will aim to improve all of his current competition PRs, which are as follows:

Nicolaas du Preez will also look to keep his 100% win streak, having won all of the six competitions in which he took part.

Nicolaas du Preez is done with the heavy deadlift and squat sessions until the 2022 RPC Elite Raw. Nicolaas will perfect everything in the next 11 days and try to shock the world with an incredible performance. If everything goes right, Nicolaas could put his name down in the rankings for the Heaviest Total in the 125KG weight class.

The Best Russian Twist Alternatives for a Rock-Hard Core