Coaches Milos Sarcev and George Farah struggle to find a physique comparable to Dexter Jackson, "There is no way somebody is going to repeat what Dexter did". 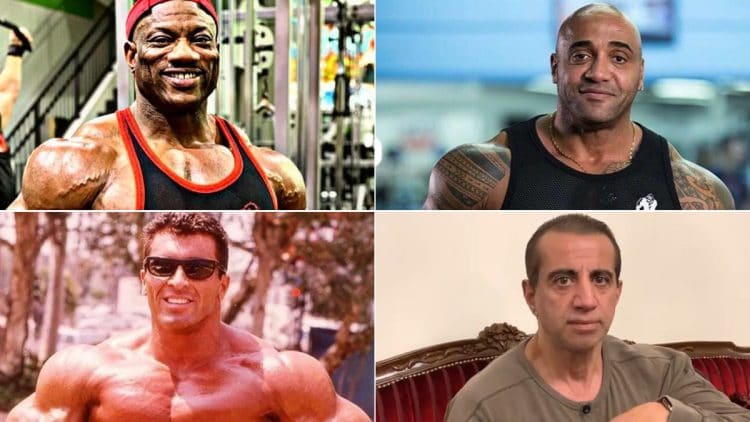 The ageless wonder Dexter Jackson is recognized for his incredible longevity and successful bodybuilding career. In a recent interview, Dennis James, Milos Sarcev, and George Farah link up to discuss Dexter’s physique and how modern bodybuilders would fare at Olympia in the early 2000s.

Competing in the sport for three decades, Dexter Jackson left an impact on bodybuilding that will live on for an eternity. In 2008, he captured the Mr. Olympia title, defeating legend and four-time Mr. Olympia Jay Cutler. During his lengthy career, “The Blade” weaponized aesthetics and claimed victory at the Arnold Classic a total of five times. He competed at his final Mr. Olympia event in 2020 and retired after placing ninth.

Dennis James, meanwhile, has retired from competitive bodybuilding but left a huge mark on the sport during his time as an active competitor. He placed third at his last bodybuilding show, 2012 Masters Olympia. Toney Freeman took second place and Dexter Jackson won the event.

Milos Sarcev and George Farah are bodybuilding coaches lauded for their attention to detail. Sarcev, who has trained the likes of Lee Labrada, Flex Wheeler and more recently, Regan Grimes, handles preparation in a meticulous manner. Farah is widely regarded for his knowledge in the sport and has coached elite talent like Men’s Open standout Kai Greene. According to the group, the era of aesthetics has passed, which has Milos, George, and Dennis all scratching their heads as to which athlete’s physique would stack up to a prime Dexter Jackson.

In a recent roundtable discussion on YouTube, Dennis asks the group which bodybuilder they believe has a physique similar to Dexter Jackson.

“Believe it or not, it’s Hunter Labrada. Physique-wise, Hunter is the most complete physique on stage.” George Farah said.

According to Dennis, it’s hard to find a physique comparable to Jackson’s because it doesn’t exist. George Farah is adamant that Dexter might have won even more shows had the pandemic not inhibited his ability to continue competing.

“It’s hard because it’s not there, that’s why.” Dennis responded.

“Listen to me, I’m going to tell Milos something. There’s no way somebody is going to repeat what Dexter did. I’m telling you right now, with all confidence, no matter how many people come. There’s no way there’s going to come somebody who repeated what Ronnie did. You know what I’m saying, it’s one of a kind. Dexter had done it three different decades man, and he’s still, honestly, in all reality, if it wasn’t for Corona and all this stuff, you probably could of done another 2-3 years without any problem.

Somebody with that pretty physique, good to look at, it’s very hard. That’s why I was telling you from all the people I know from Olympia, me watching at that time, I thought Labrada, if he comes in in better shape and stuff, he’s pretty to look at. Now, fast forward, we are talking about the best, whose gonna be someone like Dexter but he can never be like Dexter. Andrew Jacked is really good. He’s really good now, but you need to remember, Andrew is 36. By the time Dexter was 36, he had already won so many shows, you see what I’m saying.” George Farah told Milos.

If Milos had to pick one person to play Dexter Jackson in a hypothetical movie role, “The Mind” chose Brandon Curry because of his conditioning.

“Listen, I would have Brandon Curry play Dexter. You want shape, you want grace, you want… you know it’s going to be hard to match Dexter’s conditioning. Razor Blaydes right. I don’t think that Brandon ever reall nailed it to be close to the razor cuts of Blayde but shape is there. George, I love Dexter to death, of course. I would be same mind, that nobody could beat Dexter or nobody could be Ronnie. Before Dexter showed up, nobody knew the great Dexter Jackson was going to win 29 shows and be Mr. Olympia right.” Milos Sarcev said.

George Farah, Dexter and Milos Sarcev on How Modern Bodybuilders Would Do in Early 2000s

Coach Farah believes modern bodybuilders would struggle against the aesthetics era of competitors back in the early 2000s. He added that ‘not many’ Men’s Open competitors would do well in Olympia back then.

Jackson feels bodybuilders don’t train as hard as they used to, and that social media makes it easier to determine how someone will place at an upcoming competition.

“I think, they don’t have the drive that we had. We didn’t have social media, where we got pictures up so we can see what we look like every week. We used to TRAIN. I see these guys training these days, and I’m like ‘are you serious?’ I think that’s part of it, the social media. I see what most of these guys look like a week, two weeks out from a show, to like okay, I already know what this guy is going to place at because I already know what he looks like. We wouldn’t dare show a forearm when we were coming up.” Dexter Jackson shared.

In addition, “The Blade” underlined that athletes from this era are less disciplined when it comes to dieting. He mentioned that some bodybuilders deem it acceptable to carb-up with rice Krispie treats, suggesting that conditioning has gone out the window.

“You got these guys doing stuff man. I mean, I’ve seen some dudes. I’m not saying no names. They using rice krispies to carb up on these days, we didn’t do shit like that. It was chicken and rice and fish and rice and fish and veggies, that’s it! These guys think they know it all doing this different type of stuff now, and they not getting into the conditioning that we used to get into. You got to suffer.” Dexter continued.

Agreeing with George, Milos says bodybuilders aren’t training as hard nor do they take dieting as serious as they should nowadays.

“I agree with Dexter right. You go to the gym, you do your work. You put your foot on the gym floor it’s all business. It’s not a fuc**n picnic right. The second thing is diet, as Dexter said. You know how to get in shape, you want to get lean, you got to eat the chicken and broccoli. If you like it like that’ you can have a little bit of rice and stuff like that. You grinded. Now, it’s like you say, rice krispies. I literally have guys, that say a carb is a carb. Some have gummie bears and shit like this you know? It’s not the same. Milos explained.

“From stage of the last Olympia, I would put definitely Ramy, Brandon, and Hadi in a top ten Olympia in 1999 and in 2000 right. Hunter would be there if he was in condition, but he wasn’t. Fifth you know, Nick Walker, as good as he is, I don’t think he would mix good with the aesthetics and shape and conditioning that we had back then. Conditioning was very good but for me, I would have a top three from last year’s Olympia in the mix. Not winning, but in the mix.” Milos said.

Milos maintains that any of last year’s top three at Olympia in Men’s Open would place in the top ten at Olympia in 1999. While Milos asserts Hunter might crack the top 10 if his conditioning was on point, he doesn’t believe 2021 Arnold Classic champion Nick Walker would have the shape or aesthetics to hang with top talent from the early 2000s.

Despite stepping away from the sport, it’s clear that Dexter Jackson’s influence on bodybuilding is still prevalent. Representing the era of aesthetics, Dennis, Milos, and George believe Jackson’s physique stands alone but if they had to compare, it would be similar to the likes of Andrew Jacked, Hunter Labrada, and Brandon Curry.