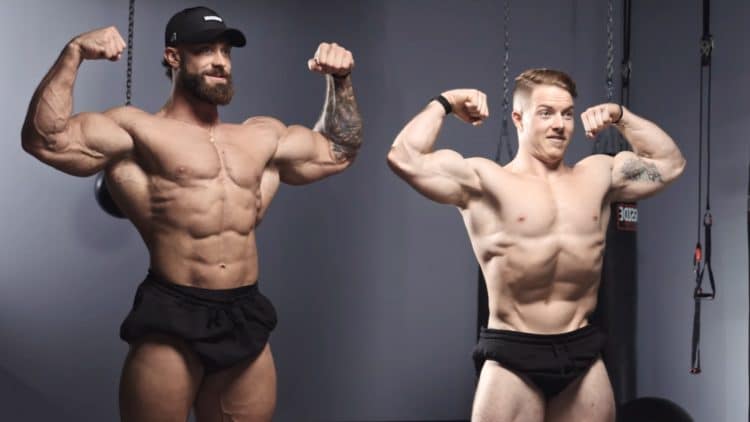 Through his ventures in the world of CrossFit, Noah Ohlsen has proven himself to be one of the Fittest Men on Earth. However he recently tested his fitness in a different way, by living like three-time Classic Physique Olympia champion Chris Bumstead for a day.

Ohlsen and Bumstead come from different worlds, but are each valuable in their own right, at least to their sports. Noah is a multiple time competitor at the CrossFit Games, coming as high as second place in 2019, while Chris is fresh off of winning his third straight Classic Physique Olympia title.

Recently the two teamed up for a video on the Gymshark YouTube channel. The premise of this video was simple: Noah was going to live like Chris for a day, training, eating, and posing like the bodybuilding champ.

“My fitness journey started in the bodybuilding world… The same way it does for every high school aged male, where you want to get big just because. So I started doing that for a while, and then I transitioned into CrossFit,” Ohlsen told Bumstead.

This video was filmed before the 2021 Mr. Olympia, so it began with Chris talking about his prep for the contest. He explained that while he only spends around 4 weeks or so in prep mode, he spends all year keeping his diet and check, so that he can work his metabolism to get in better shape.

After this, Chris Bumstead explained to Noah Ohlsen that today was chest day, so that is what they would be working on in the gym. Once arriving at the gym, they kick things off with some dumbbell presses, while discussing how stability can change things with weights.

Chris explained after the workout, which included some cable work, and a lot of high rep sets, that this was something he was doing while in prep, not necessarily going as hard as he would have if he was in the off-season. He explained that the reason for this is so that he can maintain his strength, without wearing about any sort of injury.

The last step was the posing practice, which came as a bit of a surprise to Ohlsen. Nevertheless he agreed to go through the rounds with Chris, learning the unique style of posing that comes with Classic Physique competition.

“You don’t want to look like you’re constipated in the face, right?” Ohlsen asked, jokingly.

“No, that’s part of the hard part, flexing as hard as you can, and then just looking like you’re not doing anything.”

It was certainly entertaining to see these two fitness icons teaming up, with Noah Ohlsen dipping his toes into the world of bodybuilding. Perhaps one day we will see Chris Bumstead return the favor and try CrossFit with Noah.

How Many Calories To Eat Per Day Calculator