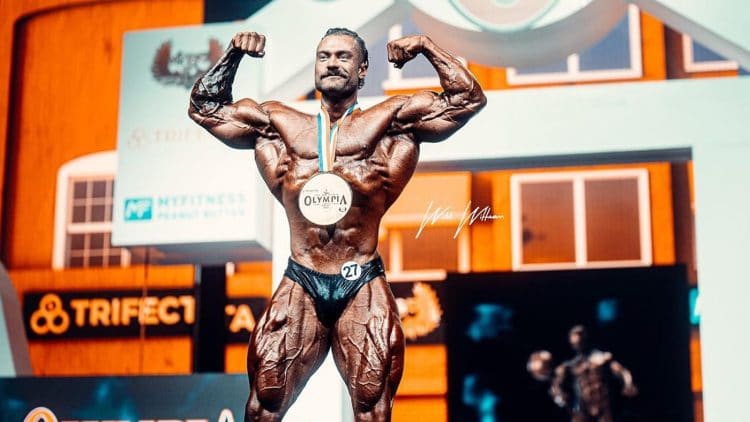 FacebookTwitterRedditFlipboardLinkedIn
Chris Bumstead is the 3X Classic Physique Olympia champion. He successfully defended his throne at the Mr. Olympia Classic Physique 2021 showdown, and we expect his reign to last a long time.

As the voice of bodybuilding, Bob Cicherillo drew up excitement (and suspense) for the Classic Physique Olympia 2021 winner announcement, fans put down their protein bars and prayed to the God of bodybuilding (aka Arnold Schwarzenegger) one last time to bless their favorite athlete. The Mr. Olympia arena erupted when Bumstead was announced as the Classic Physique Olympia 2021 champion. The 26 other athletes stood no chance in front of him.

Chris Bumstead is fast becoming one of the most popular bodybuilders of our time. He has been accoladed by bodybuilding legends like Jay Cutler who also thinks that Chris could grow into an open weight competitor, and win the Mr. Olympia title in the future.

Shots were fired even before the athletes stepped on stage to stake their claim for the Classic Physique Olympia 2021 throne. Things got rough at the 2021 Olympia presser when Chris Bumstead told a shirtless Breon Ansley that he had “no chance” at winning the Classic Physique 2021 crown.

Chris Bumstead was right on the money from the moment he stepped on stage for pre-judging.

In the Olympia 2021 presser, Bumstead mentioned that he had gained around 10lbs of muscle mass in his back. And as they say, Olympias are won from the back.

Chris Bumstead was untouchable this year. His delts, chest, abdominals, quads, hams were unmatched. He made the entire posing routine look effortless.

Terrance Ruffin won the Arnold Classic this year and was a top contender for the Classic Physique Olympia 2021 crown coming into Mr. Olympia 2021 showdown. Ruffin is probably one of the best posers in the world right now. Each move on stage was a money shot. During his posing routine, Terrence showed why bodybuilding is an art.

Breon Ansley knew he had the goods. It was why he was not shy to show off his physique at the Olympia 2021 press conference. He was dry and in peak conditioning – exactly what the judges are looking for in their Classic Physique Olympia champion.

It was Urs Kalecinski’s first Olympia showdown, and he nailed it with his fourth-place finish. Urs Kalecinski had some of the best Classic poses in the division. Urs is just 21-years-old, and we see him winning the Classic Olympia in the coming years.

Do you agree with the Classic Physique Olympia 2021 results? Who do you think should have won the title? Let us know by tagging us on social media and in the comments below.

The 2021 Mr. Olympia saw Brandon Curry wind up in the second place position. However this is something that his...

Bodybuilding is huge in Egypt, where reigning Mr. Olympia champ Big Ramy comes from. As a result, his hometown of...