The 11 athletes on the list will psyche you up for your next forearm workout. 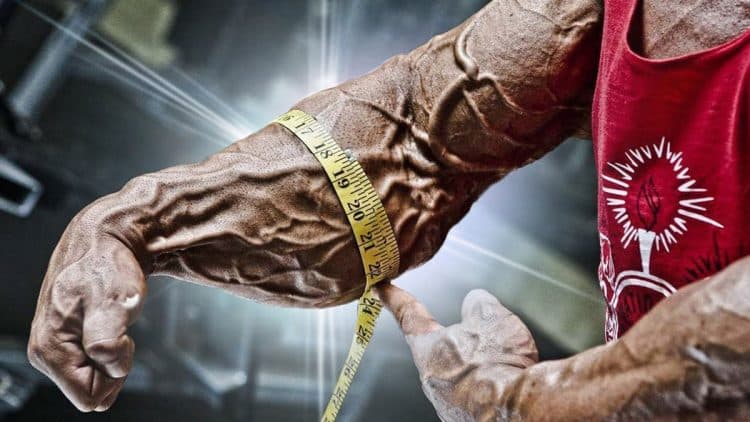 While most people treat their forearms as accessory muscles, they are much more than that. A pair of jacked, diced, and vascular forearms represent strength and hard work.

While most people spend hours working on their biceps, they have a step-motherly attitude towards their forearms. These folks forget that forearms make up half of their arms, and if you’re after physique aesthetics, you need to hit your lower arms with the same intensity as your bis and tris.

Furthermore, in a survey, women rated arms as the second-most sexiest male body part after the chest. This should give you enough motivation to work on your arms with all seriousness.

11 Biggest Forearms in the World

Below are people with the biggest lower arms:

When we talk about “biggest” muscles, most people expect bodybuilders to top the charts. While this is true in most instances, it is not the case for the biggest forearms in the world list. Jeff Dabe, an arm wrestler, claims to have 20-inch forearms, making him the proud owner of the largest lower arms on the planet.

Born in 1963 in Minnesota, Dabe had unusually large hands for an infant. Doctors could not point to a specific cause or condition behind his large hands. With age, Dabe’s hands and forearms have grown in size.

Dabe’s forearms have a 20-inch circumference, and each hand can hold an entire basketball. His gigantic limbs gravitated him toward arm wrestling, which he engaged in until suffering an injury to his right elbow. However, Dabe is back to competitive arm wrestling after a 10-year hiatus and now uses his left arm.

“I was always good at arm wrestling, but the size of my hands did shock people at first — [but] I had the strength to back it up.”

The University of Minnesota conducted tests on Dabe’s arms for possible signs of gigantism and elephantiasis. However, they couldn’t find evidence to support that claim.

Interestingly, some previous measurements clock Dabe’s forearms at 19 inches. However, new sizings on his Instagram page show his lower arms at 20 inches. One could argue that the arm wrestler’s forearms and hands have not stopped growing.

Due to his monstrous arms, Jeff often gets compared to the animated characters Popeye and Wreck-It Ralph.

Former Norwegian bodybuilder Gunnar Røsbø takes the second-place on the biggest forearms in the world list with his 20.5-inch forearms. Røsbø competed alongside legendary bodybuilders like Lee Haney and stood out on stage due to his gigantic forearms.

During his competitive bodybuilding days, the upper and lower arms of the bodybuilder appeared to have the same width, which added to his physique aesthetics and symmetry.

Notably, no one could verify the size of Røsbø’s lower arms independently. So, we are taking his word for it.

Although Gunnar was an elite bodybuilder, he didn’t lead a healthy lifestyle. Furthermore, he came to almost every one of his competitions drunk.

Gunnar believed that by drinking alcohol prior to competition, he would lose more water weight and stay defined. He allegedly drank 750 ml of vodka and 24 beers the day before a show, believing it would help him achieve peeled conditioning.

Are you wondering why we have Jeff Dabe on number one even though Gunnar Røsbø has bigger forearms?

First, the size of Dabe’s forearm is verified while we have to take Røsbø’s measurement at face value. Second, Dabe has big elbow and wrist joints, which makes him genetically predisposed to have massive forearms.

Also Read: What is a Good Height for Bodybuilding?

The biggest forearms in the world list cannot be deemed complete without Frank McGrath. Besides having one of the beefiest forearms on earth, McGrath arguably has the most vascular lower arms.

The size, girth, symmetry, conditioning, and vascularity of McGrath’s forearms put him in a league of his own. Per “The Wrath,” before beginning competitive bodybuilding, he trained his lower arms every day in his home gym. However, he doesn’t work out his forearm often now.

Sergio Oliva is a legend of the sport of bodybuilding. He invented a pose only he had the size and shape to pull off. Dubbed the “victory” pose, it required extending the arms straight overhead with fists goosenecked.

The shot required perfect symmetry and size to get right. Oliva’s ginormous forearms and biceps were arguably the highlights of the pose.

Lee Priest arguably had the freakiest forearms of all time and measured 18 inches at their peak. Priest recently underwent a body transformation. His forearms are back in shape and are taking on a life of their own.

Besides his monstrous forearms, Priest had one of the best triceps in the game. Only a few other bodybuilders could keep up with him in the arms department.

Also, Lee Priest is one of the few bodybuilders who hit Oliva’s victory pose on stage. He did not just hit the pose. He killed it.

Heath possibly has the best brachioradialis development in the sport of bodybuilding. It is a superficial forearm muscle located in the lateral forearm.

At his peak, Heath’s lower arms looked like they had forearms of their own. Phil Heath has seven Sandows to his name and earned the moniker “The Gift” for his insane genetics. There are virtually no weak spots on his physique.

With seven titles under his belt, James “Flex” Lewis is the winningest 212 Olympia champ. He did in the 212 division what Heath and Arnold Schwarzenegger achieved in the Men’s open division.

The now-retired bodybuilder had the thickest and densest lower arms in the game in his prime. The separations and lines in Lewis’ forearms are the envy of most bodybuilders.

It’s almost criminal to talk about the biggest arms in the world and not mention Roelly Winklaar. Winklaar is a freak of nature and blessed with insane genetics.

Winklaar’s biceps peaks, horseshoe triceps, and thick and vascular forearms make him stand out. His arms are his strength, and he capitalizes on them with every pose he hits on stage.

Chuck Sipes was one of the early Mr. Olympia contestants and competed in the 1960s. He finished third in the 1966 Mr. Olympia behind Larry Scott and Harold Poole and runner-up in the 1967 Mr. O contest behind Sergio Oliva.

Measuring a staggering 18 inches, Sipes had bazookas for forearms. Sipes was one of the nicest guys in the bodybuilding world. He performed in strongman shows and made appearances at various high schools and colleges worldwide.

Casey Viator was a legendary bodybuilder and had an incredibly chiseled physique. He became the youngest Mr. America champion of all time by winning the contest at the age of 19 in 1971. The record stands to this day. His career-best placing at the prestigious Mr. Olympia was third (1982).

Casey trained with the likes of Arnold Schwarzenegger and Frank Zane.

His bodybuilding career entered top gear after Arthur Jones took him under his wings. Viator had one of the most striking forearms and calves in the business.

You shouldn’t be surprised to find “The King” on the list. The guy dominated the sport for eight straight years and had the best of everything.

While Ronnie Coleman didn’t reveal his forearm size, he disclosed that he had 22-inch arms (that blew up to be 24 inches during the off-season). Although we don’t know the exact size of Coleman’s forearms, he had enough meat on his lower arms to earn him a spot on the biggest forearms in the world list.

Looking at beefy forearms probably has you pumped to add size to your lower arms. However, you might be feeling lost and confused about where to start. Given below is a forearm workout that will help add muscle to your forearms:

If you’re struggling with your forearm size, employ the following tips to blow up your lower arms:

Contrary to what many people think, gripping the bar too tight while doing biceps and back exercises isn’t enough to build jacked-up forearms. You need to stop treating your forearms like accessory muscles and train them with intent.

Here are the muscles you should be training in your forearms workout:

Your forearms are small muscle groups and require less time to recover. If your lower arms are lagging, you could train them two to three times a week or follow Frank McGrath’s example and hit them every day.

3. Increase Your Time Under Tension

No matter how hard you train in the gym, you won’t see any progress in your lower arms until you’re following an effective diet and recovery program. Set a calorie target for yourself based on your goal physique, and eat a protein-rich diet to meet your daily macro number.

Who has the biggest forearms in the world?

Considering his recent measurement, arm wrestler Jeff Dabe tops the list of the biggest forearms in the world with his 20-inch forearms.

What is the average forearm size?

What is “Popeye Syndrome”?

If you sustain damage to the tendon that connects your biceps to your bones, it can rupture and tense into a painful ball, sometimes called a “Popeye’s muscle” or “Popeye Deformity.” It’s named after the ball-shaped biceps of the cartoon character, Popeye.

Next Read: Skinny Forearms? Build Your Lower Arms with These 13 Exercises and Workout!

Building big thick forearms is a lost art. However, the bodybuilders that put the time and effort into it stand out amongst their peers.

If you have skinny forearms, use the workout in the article to add meat to your lower arms. Remember, forearms can be a stubborn muscle group for most people. Beefing up your lower arms will test your mettle. Good luck.