Life and accomplishments of Pauline Nordin 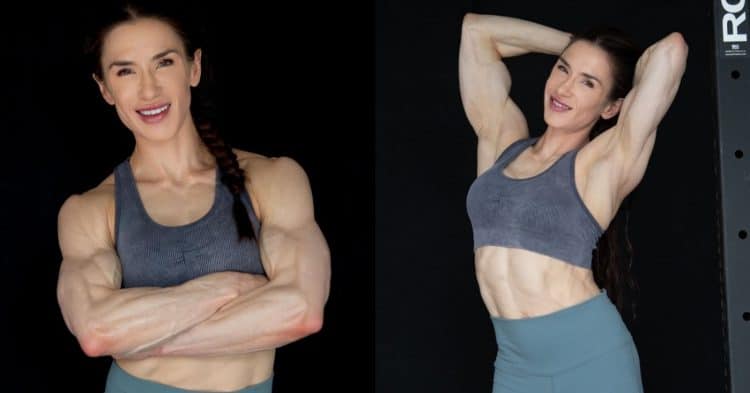 Pauline Nordin is an IFBB bodybuilder and model. She’s suffered with body image issues and even struggled with an eating disorder during her teenage years. At one point in her life, Pauline weighed just 85 pounds.

This resulted in some dark days that Pauline turned into sunshine when she began going to the gym to take her fitness more seriously. By the age of 20, Pauline Nordin had won her first competition.

Today, Pauline is an entrepreneur and a woman who aspires to be inspirational with her story.

Pauline Nordin is a competitive bodybuilder for the International Federation of BodyBuilding and Fitness (IFBB). She was born in Ystad, Sweden, and like many, had her share of difficulties growing up. At the age of 12, she hated what she looked like and thought that was because she was eating too much. So she began to eat less and workout more. At that time, Pauline Nordin was training several hours per day with one goal in mind, to get thinner.

She managed to hold on to this lifestyle for five years. In her late teen years, she was looking at a fitness magazine and was inspired by a new vision. Pauline Nordin began to realize that she may have a body image issue that something needed to change. She saw that she could still work on her body image without sacrificing her health, or even her life.

For the next three years, eating well and working out in the gym was her life. She was determined to launch a new beginning. Pauline’s dedication would eventually pay off. In her first competition, she took home first place and was the Teenage National Champion. She would go on to defend this title for three years in a row. Following that, she continued on but at the Senior Division level. There she placed on the podium as the runner-up two years in a row.

She was widely admired and even had murals of herself done by local artists.

Pauline Nordin was now on the national stage and turning heads around the world. Reality television show producers began to seek her out in Sweden. She went on television as a fitness trainer who helped people lose weight. After that, Pauline moved to Estonia and lived in a castle where she worked as a coach and nutritionist for team Sweden. There, her fitness training skills and leadership abilities helped her to lead Sweden to victory in 2006.

At the end of 2006, Pauline Nordin moved to America to broaden her horizons and pursue opportunities. She appeared on magazine covers and was determined to compete in the IFBB circuit. She didn’t stop moving for several years. Pauline continued to model and compete, and also became an author by 2008.

Pauline Nordin’s training program is not unlike any other bodybuilder. She has a stretch session before and after each workout. After each workout, she will stretch until her muscles can’t take it anymore. She calls the pre-workout stretch a “pump” where she warms up before continuing on in her workout sets. She shares her workout tips to Instagram, saying she raises women to be strong.

I am not your regular fitness coach. Your goals, my priority. I show you the way, MY way. Just take the leap of faith. I know you can do it because I could do it and did it. Discipline is the muscle to exercise. Mastering your mind is what I teach. But when you say ‘I just want to get lean and STAY that way but I get SO hungry and feel miserable all the time’ I say WAIT, HOLD ON, not so fast! I’m a smart woman. You think I’d be doing this if it didn’t make me HAPPY?

I’d quit that bull YESTERDAY! Life’s HOPEFULLY too long to STARVE JUST FOR WHAT: a six pack of abs? HA! That’s cute, but so are cookies every night. I created Fighterdiet out of necessity. There was NO method for the impossible: get lean, stay lean, NOT hungry and PSYCHO! So, I had to create it. AM I GLAD THAT I GOT THE GIFT ON THE BEACH in 2007?! Yeah I got an epiphany. And that’s what I’m teaching you about. How to DO it. And LOVE it.

We have one life only. MAKE SURE YOU CAN SAY YOU LIVED AFTER YOUR OWN HEART, and PROUDLY so. I Build YOU UP. I ELEVATE you. I PUSH you. I make you LAUGH. I make you THINK. If I intimidate, it’s just because my mission is always to make you STRONG, CONFIDENT, UNSTOPPABLE. I raise women to be STRONG.

Pauline Nordin trains twice daily, six times weekly. She describes it as a ritual. Mornings consist of a cardio session, and her evening workout is a weight-training session. Her six days of weights target these areas daily:

Pauline Nordin does have a favorite body part. She loves to work on her triceps, and her favorite exercise is chin-ups.

For diet and nutrition, Pauline Nordin still watches what she eats. She eats in phases, with a lean-inducing phase and a re-feed phase. Her first phase includes a lot of vegetables, up to 7 pounds a day. With that, she adds lean protein such as whey, salmon, chicken, egg whites, cheese, and oils such as fish oil and olive oil. Pauline Nordin also takes in protein with nuts.
Pauline builds a diet of macronutrients, but expands on that:

Food is much more than just macros.
.
Yes, food is made up of macronutrients, but that’s not ALL they are. When you are focused on calories and protein and choose Fighterdiet approved foods, you get to eat big and the macros take care of themselves.

Pauline Nordin will take in carbs during her second phase of eating which she calls the re-feed phase. Her daily protein intake is approximately 110-150 grams. She explains refeed days on Instagram:

It’s a lifestyle not a diet. That’s why we in corporate refeed days into the Fighterdiet meal plans. This is especially important when you are in a fat loss phase.

Refeed days are designed to give a temporary break from calorie restriction. The theory behind refeed days is to improve your hormone levels, namely leptin, to prevent weight loss plateaus caused by a process known as adaptive thermogenesis. They may also decrease your risk of binging and improve athletic performance.

Today, Pauline Nordin works as a fitness trainer and shares her diet and training tips on Instagram, where she also posts before and after photos of her clients that have succeeded using her program.

She’s come a long way from body image issues to a success story that has inspired many to change their lives too.