Seven-time Mr. Olympia winner Phil Heath looks leaned out about two months after the Olympia, showing off his jacked midsection 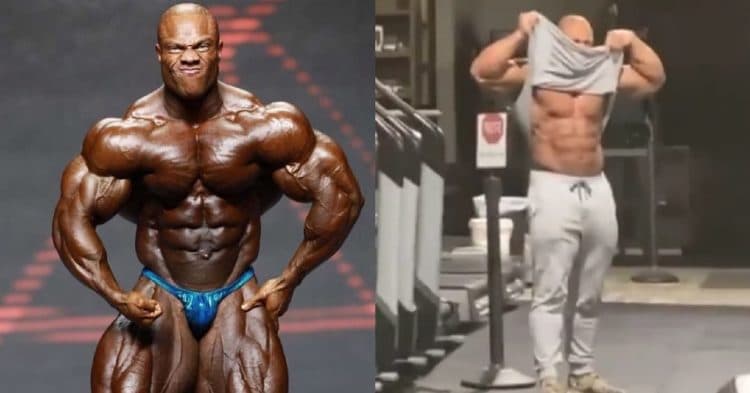 Physique updates from Phil Heath are few and far between nowadays. However he recently gave a peak at his midsection, and it has everyone watching in awe of what they see.

Over the years, Heath has put together a resume to cement himself as one of the greatest bodybuilders of all time. This has come from a consistent drive that led him to seven Mr. Olympia titles.

He was even going for his eighth in 2020, after taking a hiatus away from competing. Returning to the big stage for the first time in over a year, the bodybuilding legend came in third place, to the disappointment of those who were hoping to see something incredible happen.

Now, a little more than two months removed from the 2020 Mr. Olympia, Phil Heath has not been very vocal on social media. That is, at least not as far as recent, solid physique updates are concerned.

However that changed recently, when a post to his wife’s Instagram Stories started making the rounds. Here he can be seen, in the middle of lifting his shirt to check his abs, from a sneaky video recording through the mirror.

Now to be clear, there is only so much that can be gleaned through this brief, and somewhat blurry shot of Phil Heath. However from what we can see, it is clear that his abs are super visible.

Considering one of the major complaints about Phil over the last few years have been with his midsection, this is a good thing. On top of that, he looks substantially leaner, which is giving him the appearance of being rather shredded.

As previously stated, it is not often that Heath shares any up to date looks at his physique, but when he does, it is usually of his arms. This is certainly understandable, given that this is one of his more recognizable features, but it still makes it a nice surprise to see them in action.

While it is clear that Phil Heath is spending a ton of time in the gym, there is no indication when or if he will compete in 2021. The initial thought was that he may take part in the very first Athleticon event, given his connections with Dany Garcia and Dwayne Johnson, but that show has since been delayed.

If we do get to see Phil Heath onstage again soon, it will be welcomed by his fans everywhere. Since he has nothing left to prove at this point in his career, it is always a treat to see him competing.