The seven-time Mr. Olympia champion showed off a trim build during a bicep workout on social media. 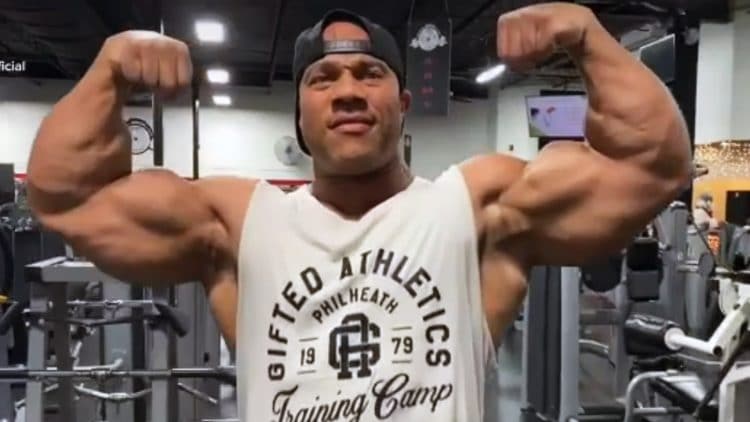 As a seven-time Mr. Olympia champ, Phil Heath has been a staple to the bodybuilding scene for years. In a recent update to social media, the decorated bodybuilder is looking strong yet noticeably smaller than usual.

Phil Heath occupied a period of dominance in modern bodybuilding. Demonstrating his superiority for well over 5-years, Heath proved to himself and the world that few physiques could compare to his.

In order to sustain an incredible physique like Heath’s, harmony in diet and muscle bulkiness are essential to success. Even at 41-years-old, Phil Heath is a proven talent in competition. Heath secured third place at the podium for 2020 Mr. Olympia.

Recently, Heath admitted to contracting COVID-19 last summer. The legend insists that he lost a fair degree of muscle mass while dealing with the lingering infection. While Heath has made a full recovery, the harrowing ailment has caused the bodybuilding star to lose a considerable amount of bulk.

Phil Heath recently shared an arms workout on social media. Despite losing some muscle mass, “The Gift” is still looking strong in the practice room. Compared to the last time he was on stage, Heath appears to be noticeably lighter.

As one of the kings of modern bodybuilding, Heath continues to make strides in the gym and aims to make a successful return to competition. While rebuilding his muscle mass, Heath believes once he regathers his rhythm and flow, his chances at a comeback to competition will become more likely.

While Heath is unable to tip the scales like he used to, he still manages to wow fans with unbelievably developed biceps. A recent physique update indicates Phil Heath is still packing on plenty of muscle to his frame despite losing a considerable amount of bulk to COVID-19.