Phil Heath Does Arm Day With The Rock

Phil Heath may not have competed in 2019, but he has been staying busy in the gym. Most recently, he did some training with Dwayne “The Rock” Johnson.

Heath decided to take the year off from bodybuilding competition, after dropping his Mr. Olympia title to Shawn Rhoden. While there were concerns that he was retiring, he quickly shot down those rumors. Not only that, but he has made it clear that he has been in the gym anyway.

The fact that Heath has been working hard in the gym became evident in a recent photo with Dexter Jackson. In the picture, you can see that he has been putting some work in his arms, as they looked huge. Furthermore, these thoughts were recently confirmed when he showed off, after arm day.

The post that Phil Heath made to Instagram recently shows that he was pumping iron at the gym. Nevertheless, what is most interesting about this, is who he was training arms with. In the picture, taken at Iron Paradise gym, Heath is standing alongside none other than Dwayne “The Rock” Johnson.

“Arm day was a success at the Iron Paradise 💪🏽 nothing like a good ol’ family training session! Thanks @perbernalphoto @shuriecremona for getting our good angles!”

While it was not put in the post exactly what they did that day, Heath says it was arm day. There are few people better to train arms with than Dwayne Johnson. While he spends a good amount of time in his home gym, Johnson does have some of the biggest arms in Hollywood. Therefore, it seems safe to assume that their workout was hard, and will provide good results.

Phil Heath has made it clear that he intends to return to competition soon. With the help of Dwayne Johnson, it is very likely that his arms will be in top condition, by the time he hits the stage again. 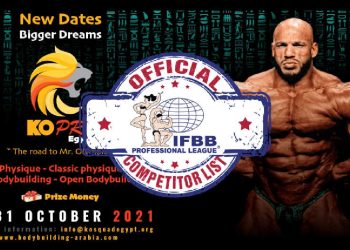 The world of bodybuilding continues with the 2021 KO Pro Egypt, set to go down on Halloween, October 31st. Ahead...