Phil Heath and Kai Greene Had A Blast Together At 2019 Sheru Classic in Mumbai, India! 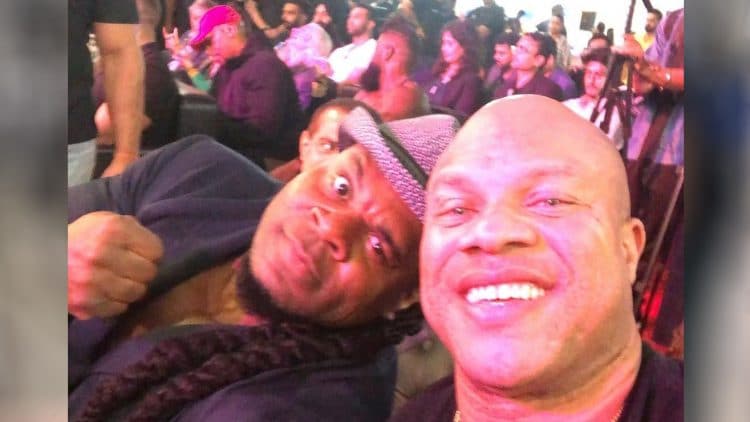 When it comes to bodybuilding rivalries, Phil Heath and Kai Greene are undoubtedly near the top, having engaged in some of the most exciting and memorable battles on the Olympia stage.
And you’d think there may be some bad blood between the two (and maybe that was the case at one point). But that surely wasn’t the case at the Sheru Classic (November 15-17) currently taking place in Mumbai India, where they hung out together.
Phil Heath is a 7x Mr. Olympia champion who only lost the title in 2018 after winning since 2011, while Kai Greene tried three times to dethrone Heath (2012-2014) but was unsuccessful in his attempts. But even with such a one-sided result, fans loved the rivalry and it was great for the sport.
Kai Greene stopped competing in 2016 after he won the Arnold Classic, Arnold Classic Australia and Arnold Classic Brazil that year. Phil Heath hasn’t competed since the 2018 Mr. Olympia competition.
But it’s good to see the two together and many people may be wondering what’s next for both of them.
Here’s what Phil Heath wrote on his Instagram…

“So this was the day of many memories shared between @kaigreene and myself in front of an incredible crowd here in Mumbai India at the IHFF @sheruclassic.

The history between us in my opinion could easily rival any competitive duo in most sports let alone bodybuilding.

We haven’t sat next to each other in India since 2012 and I must say it was a blast!!! Stay tuned ladies and gents as this was only Day 1 of the expo and I think there just might be some cool and possible “stranger things” to come haha.”

The event isn’t yet over and Phil Heath wrote that there will be some cool and “stranger things” to come, so we’ll be curious to find out what he means by this.

Kai Greene, on the other hand, hinted at a comeback against Phil Heath recently, and “The Predator” said even more recently that “it’s very possible” he’ll compete again.

Greene has been focused on his acting career, while Heath is also focused on his own endeavors. But, 2020 is just around the corner which has everyone wondering whether or not these two legends will be making a return to the Olympia stage. If Phil Heath comes back and wins another Sandow, he’d tie for the most wins all-time alongside Ronnie Coleman and Lee Haney.

And Kai Greene would be looking to get revenge for his defeats.

How To Do The Dumbbell Deadlift Exercise Guide