At the 2021 Kern US Open Dan Bell nailed the ATWR after hitting a three-way tie for squat world record in 140kg+ weight class. 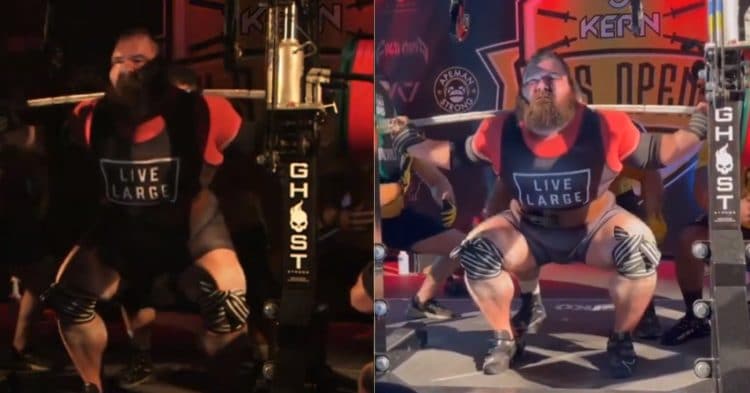 A huge accomplishment for Daniel Bell this weekend at the 2021 Kern US Open. First, he met with the angst of a three-way-tie but knocked the other two competitors out of the park with an all-time-world-record (ATWR) squat.

Daniel Bell in the super-heavyweight powerlifting class has performed well at the 2021 Kern US Open this weekend. Prior to that, Dan Bell held a three-way-tie for the all-time world record with a 500kg/1,102.3lb. He shared the record with Vladislav Alohozov and Mojtaba Maleki.

For his final attempt at the Kern US Open this weekend, he broke his previous ATWR and set a new one with 505 kilograms (1,113 pounds). Check out the lift:

Daniel Bell clocked in at 170kg/375lb for this competition.

It was clear from the start of the comp that Daniel Bell was in for a big win. His first attempt was 465kg, and his second jumped 20kg to 485kg. By his final attempt, he had the record at 505kg.

Here is Daniel training for the US Kern Open just a few days ago:

Prior to this weekend, Daniel Bell set a record at the Hybrid Showdown III in Miami, Florida, 1,182.5kg/2,607lbs Raw With Wraps. He is also the record holder for total weight raw with wraps and sleeves with a total of 1,127kg/2,484.6lb.

For this weekend, he set the ATWR and took home first place. Tomorrow is Day Two of the 2021 US Kern Open.