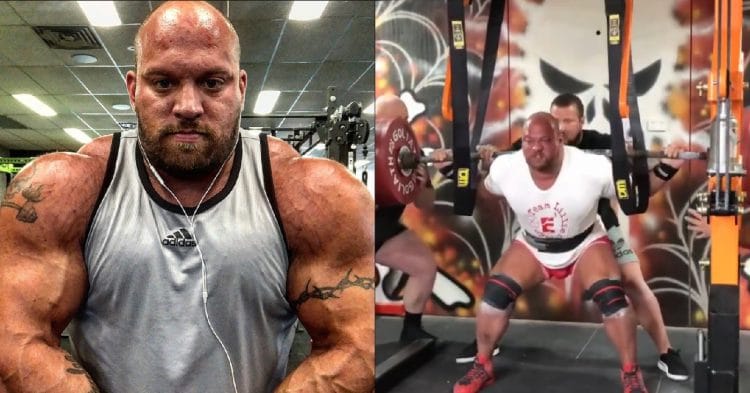 Competing for a decade and a half, Eric Lilliebridge has long be considered one of the strongest powerlifters in the world. Yet he showed that he is still reaching new heights recently, with an impressive showing in training.

There are a lot of accolades that Lilliebridge has held over the years, but one of the most notable is the fact that he holds the distinction of the second heaviest squat in the 140kg division’s history. His 477.5kg record stood unbeaten for a while before it was finally thwarted, but it has only ever been surpassed one time in official competition. Besides that, he still currently holds the record for the heaviest total both raw and wrapped in the division. He has proven himself a more than capable athlete over the years.

It has been a while since Eric Lilliebridge tried to outdo his personal best with the squat. However he decided to give it a try recently, and as this video to his Instagram shows, he was quite successful. The 30-year not only managed to hit a jaw-droppingly massive 483.5kg squat, but he is now setting his sights on a 500kg goal for 2021.

This lift felt amazing. By far the strongest my squat has ever been in my life. Definitely had a bit more in me too. ⁣⁣⁣⁣

It’s been over 4 years since I’ve attempted a new all time squat PR. There were points during that time that I doubted myself with being able to ever surpass my previous best. But something changed in me this year and I started to believe again that I could. And here it finally is. ⁣⁣⁣⁣

I will be backing off for a little while now and doing a nice deload into the new year. This will wrap up the rest of my heavy training for 2020. ⁣⁣

My next big goal for 2021 will be squatting 500+kg. I’m not sure when it will happen next year, but there’s no doubt in my mind now that I will do it. Stay tuned!”

Man, that was some heavy weight. Lilliebridge wrote that he felt he had more in the tank, and it certainly looked like it. The fact that this was his all-time personal best, but still at a lighter bodyweight than what he was when he squatted the 477.5kg, is also quite incredible.

There is a lot to like about the skills of Eric Lilliebridge. He seems to be picking things up with his training, making it seem like he could be returning to competition soon. It will be interesting to see him chase that squat record, and the 500kg goal he has in front of him.