Despite not being able to compete for the second year in a row, Nathan De Asha shows off his physique and reflects on missing the event 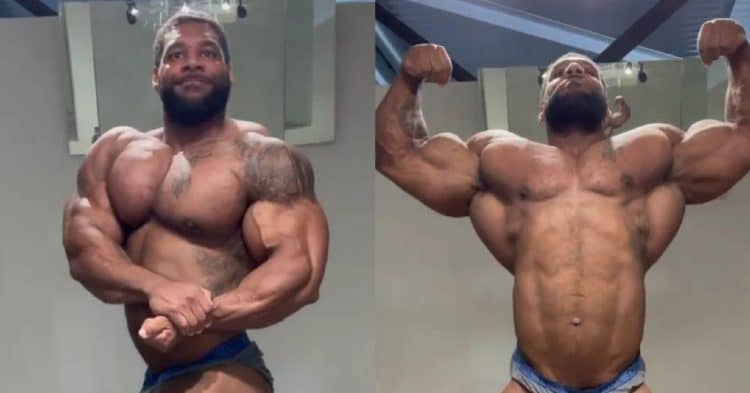 Regardless of what you think of him, there is no denying that Nathan De Asha is a very talented bodybuilder. With him missing out on the 2020 Mr. Olympia, he decided to share a bit of a preview of what could have been with a crazy physique update.

For the second year in a row, De Asha will be sitting out from the Mr. Olympia. He was expected to compete in 2019, but wound up withdrawing on short notice after he was forced to attend a court hearing during the contest. This hearing was to determine the results of the charges he was facing for distributing steroids through the postal service. Although he did not serve any jail time for the offense, it did cast a bit of a dark cloud over him and made him miss the big show.

This year it is the travel restrictions in the UK which will prevent Nathan De Asha from attending the 2020 Mr. Olympia. However, he wanted to make it clear that he was prepared to bring a full package to the stage this year. Taking to his Instagram, he explained the circumstances that forced him out of the event while showing what could have been with a video of him hitting a variety of poses.

“Well as I said yday we was fuelled with total aggression,” De Asha wrote.

“Another year and another Olympia missed, this one is totally out of my hands. Due to my country being on another national lockdown means the USA embassy is also closed. Am not issuing visas until jan 2021 😢Massive thanks to my coach @ahmd_askr and the boss man himself @bader_boodai doing everything in their power to get me to Vegas well now Florida even @managermatt1 been on the phone doing all he can do. We’ve come to realise that some things are just out of are control. This year has been a total shit storm from missing the Arnold to this all due to COVID.

From early on I’ve always had it hard so I expect nothing different. How we rise above these things is what shapes us to become the men and women are children look up to.

So to those who was planning on seeing me at the @mrolympiallc I am truly and deeply sorry to let you guys down. As you can see we had been dieting and it had been going exceptionally well I only needs 6/8 weeks max. @ahmd_askr knows my body better than anyone and am grateful to have him as a brother and a coach. ❤️🙏🏾

We will be back soon that’s for sure….. am positive this nightmare we’ve lived in this year is almost over. So we will be back to slaying very soon 😉

Like to wish everyone competing at this years show the best of look, the line up looks tremendous. So give it all guys and I’ll be watching use from a far”

It seems that De Asha has not been wasting his time at the gym that he is refusing to shut down, even in spite of getting fined. The 2018 New York Pro winner has always had a great shape to his physique, which is still evident here. Although it’s worth noting that his posing appears a little weak here, and his midsection needs some work. That being said, if he were four weeks out from competition, he would still have time to make some of those adjustments.

What do you think of this physique update from Nathan De Asha? How would he have done if he could compete at the 2020 Mr. Olympia?