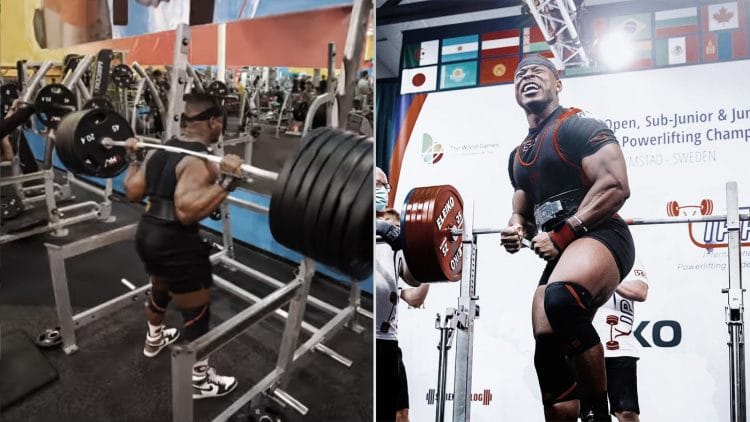 Six years into his powerlifting career, Russel Orhii has been creating world records a man possessed. Orhii holds an IPF world record for raw squats with 320.5kgs (706.6lbs). However, the 26-year-old recently broke it when he loaded 329kg (725lbs) on a barbell during a training session at a commercial gym. In doing so, Orhii surpassed his IPF world record by a significant 8.5kg (18.7lbs).

“I almost took an L squatting 725lbs/329kg in a commercial gym.” Russel Orhii wrote in the caption.

Orhii’s new record was not accomplished in a competition. Therefore, it will not be counted as an official world record. Another unknown factor about Russel Orhii’s world record is his body weight at the time of this lift. Orhii generally competes at 83kg body weight. The 329kg weight was nearly four times his competition weight which makes it pound-for-pound one of the heaviest lifts.

Russel Orhii created the IPF squat world record at the 2021 IPF World Classic Powerlifting Championship in Halstad, Sweden. Orhii won the gold medal in the five-day competition that took place from September 29th to October 3rd. Apart from the squat, Orhii also made a world record for total weight (841kg/1851.3lbs).

Just like the squatting record, Russel Orhii has also smashed his record for total weight unofficially in November 2020 by lifting a total of 865kg (1907lbs) in training.

Russel Orhii has achieved podium finish on all three occasions that he has participated in the IPF World Classic Powerlifting Championship. While he managed to secure second place in 2018 competing in the open division, Orhii won the first IPF gold medal in 2019.

Russel Orhii is also the current American raw squat record holder. According to Open Powerlifting, Orhii squatted 323kg (712.1lbs) at the 2021 USAPL Raw Nationals. Although Orhii’s training lift does not count as an official world record, the fact that he can break his records in training suggests that he is very much capable of setting new records for the remainder of his career.