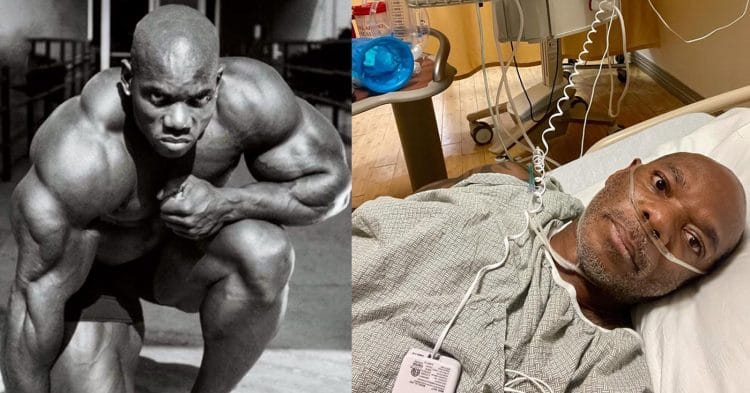 The multiple-time Arnold Classic winner and Mr. Olympia runner-up has been through more than most could bear during his lifetime. In 1994, he was involved in a serious car crash before being diagnosed with a hereditary kidney disease near the latter part of his competitive career which led to a kidney transplant in 2003.

Nicknamed the “Sultan of Symmetry” because of his amazingly aesthetic physique, Wheeler officially retired from competition in 2017 and then underwent leg amputation surgery in 2019.

Now he’s dealing with the effects of Covid of which he says is the worst thing he’s ever been through.

But despite this, he’s still fighting through it like a warrior.

Wheeler took to Instagram where he shared a message regarding his current health status.

“Update on Flex”
–
“Still in the hospital. Covid Bon-respiratory symptoms are getting better. Body aches, fever, and migraines are starting to get less excruciating day by day.

“A few days ago I did start to experience respiratory issues. I was put on oxygen (no breathing tube) and meds. The meds seem to be working and they have lowered the level of oxygen that I am on. I will be on these meds for at least another 11 days. The doctors did actually smile during my last chest films, they don’t normally give you a hint either way, so I’ll take it!”

While the potentially good news, there’s the not-so-great side of it because of his history of health issues. Flex mentioned having had a kidney transplant several years ago which he’s talked about many times before.

“The scary: I am in acute kidney failure, so my INR stabilization is an issue right now. As you may know, I received a kidney transplant over a decade ago.”

Despite being vaccinated, Flex has a compromised immune system which makes recovery much more challenging.

“I am in that rare case of people that are immunocompromised, while also taking immunosuppressant drugs for my kidney. So, even though I’m fully vaccinated, I hit that sweet spot that put me in danger for this virus.”

“Covid really is he worst thing that I’ve ever gone through.”

Flex is incredibly grateful for all of the support during this very difficult time and is staying positive and optimistic.

“I do need to thank all my family and close friends that have been checking in on me. @jake_wood_media and @wingsofstrength thank you for everything. So sorry I missed out on the biggest show of the year! @davebautista thank you for the kind words of support in your video!
–
I will beat this!“

Receiving Lots of Support and Missing Out on 2021 Olympia

Flex missed out on attending the Olympia this year which is the biggest event in bodybuilding and fitness, and a show he’s competed in many times in his career.

The 56-year-old bodybuilding icon was planning to show off some training equipment at a booth and possibly have a commentary role of some sort. Flex has cemented himself as a figure whose opinions and contributions to the sport are very valuable.

Read: Flex Wheeler Calls Out Fitness Industry For Being Too ‘Bodybuilder Focused’

While that must have been very disappointing for him to not be able to attend one of the biggest Olympias yet, health always comes first.

We wish him a speedy recovery and good health and will be sure to provide updates on his health situation.