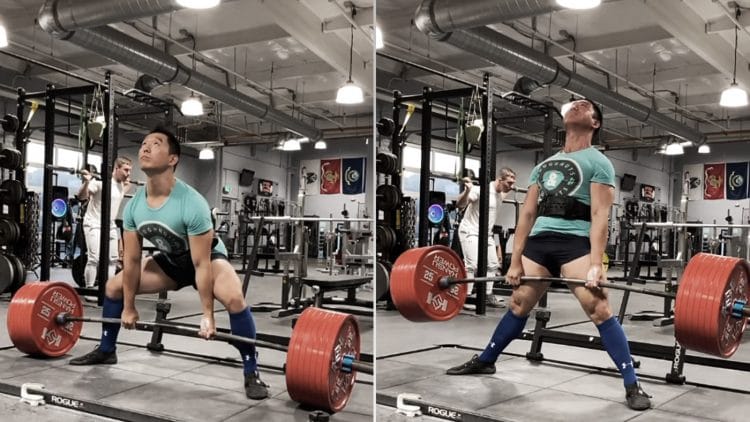 Powerlifter Yangsu Ren added another feather to his cap with a deadlift heavier than the International Powerlifting Federation world record in the 83kg weight class. Ren recently completed a 370kg (815.7lbs) raw deadlift in the gym that is 7.5kg above the IPF raw deadlift record of 362.5kg (799.1lbs).

The video uploaded on Yangsu Ren’s Instagram account shows him raw deadlift 370kg (815.7lbs) single in a sumo stance. Ren used a lifting belt for the deadlift but abstained from using wrist wraps and knee sleeves. He tested out deadlift slippers for this lift instead of shoes or socks.

The IPF world record for the heaviest raw deadlift in the 83kg weight class belongs to John Haak. He raw deadlifted 362.5kg (799.1lbs) at the 2019 USPA The Tribute in San Antonio, Texas en route to a 5th place finish. Yangsu Ren’s deadlift is 7.5kg (15.8lbs) heavier than Haak’s. However, it will not be considered as an official world record because it was not executed in a sanctioned competition. Ren did not reveal his body weight at the time of lift. However, he has competed in the 83kg (183lbs) weight class through the majority of his career and the massive deadlift is 4.57 times his competition body weight. It makes the lift an amazing feat nevertheless.

Yangsu Ren has attempted several heavy lifts in a similar range during his training in the past. Ren lifted 338kg (745lbs) and 369.7kg (815lbs) one month apart in 2019. To heal from lumbar-induced sciatica, Yangsu Ren took the time off from competition in the year 2019 and perfected his technique to execute heavier lifts in 2020. In January of that year, Ren raw deadlifted gigantic 379kg (835lbs) while pursuing his long-term goal of 388kg (855lbs) sumo deadlift and 329kg (725lbs) conventional.

He achieved the 388kg sumo deadlift goal a day before the end of the year. It took him a while to achieve the goal of 725lbs of the conventional deadlift. However, he has left the goal far behind and pulled 347kg (765lbs) back in September 2021.

Yangsu Ren last competed in the 2018 USAPL Raw Nationals and finished 7th overall. He took a break from competition in the year 2019 to recover from lumbar-induced sciatica. Given the progress he has made in his training over the last two years, Yangsu Ren will likely pull the heaviest lift of his career so far when he returns to competition.