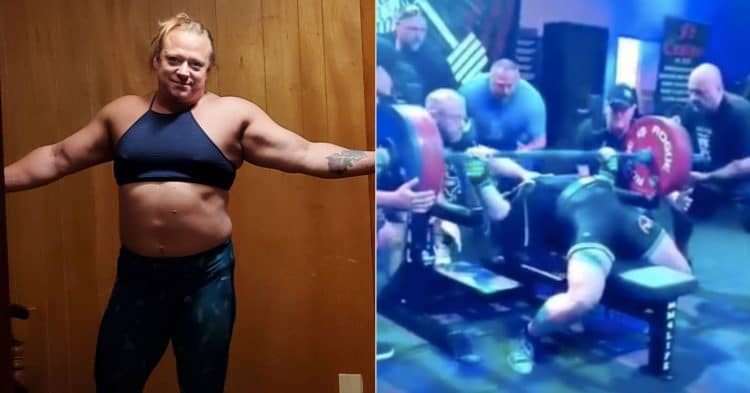 There has been a lot of talk about the men’s bench press world record lately. However that is not the only thing worth discussing, as powerlifter Rae-Ann Coughenour-Miller reminded us recently, by scoring a new female bench world record.

Over the weekend, Coughenour-Miller competed at the Metal Militia National Power Lifting Invitational, at the Bayfront Convention Center in Erie, PA. Here she competed in the +90kg weight division, equipped with a single-ply suit.

As she explained in a post to her Instagram, she had some pretty less than ideal preparation for this contest and even thought about withdrawing. However she chose to compete anyway, and ended up scoring a massive 605lb (274.4kg) bench press, which is the world record for heaviest bench ever performed by a female powerlifter.

“Going into this meet everything went wrong. My husband had 2 back surgeries. Went to the ER twice. Was stuck in bed for over a week. So during most of this prep I trained alone or didn’t train at all. I couldn’t go heavy on assistance stuff because I didn’t have a spotter. I had to switch heavy days so I could go to @dynamite_dan_460 place for spots on shirt day,” Rae-Ann Coughenour-Miller wrote.

“I attempted to put on 10lbs and put on zero. I really tried. Honestly. I had some equipment issues that thankfully @pitmankevin came to the rescue on. I tried to get an opener 2 times in a week and absolutely shit the bed both times. I struggled to get 505 lbs. We discussed pulling out.

“Experience has told me that unless you are risking injury you do the meet,” Coughenour-Miller continued. “Both times I set the ATWR in single ply my training blew. So with no expectations and no idea what to open with we set off for Erie. I decided to go with my original opener of 575. I ended up with 605 lbs. The biggest bench in history.”

The previous record for the bench press was set an astonishing 13 years ago, when Becca Swanson benched 600.8lb (272.5kg) at the 2008 American Powerlifting Federation Big Iron In-House Open. Rae-Ann seems to think it will not be long before someone breaks her new record, but given how long it took to get here, it is hard to say.

For Coughenour-Miller to score this bench press under these suboptimal circumstances is absolutely incredible. It is a testament to the skills that she possesses, and it also makes you wonder if she could have gone even heavier, had her training gone better.

Time will tell how long this new lasts for Rae-Ann Coughenour-Miller. Whether it be through her own performance, or another extremely talented lifter, whoever breaks this world record will have to work hard to do it.